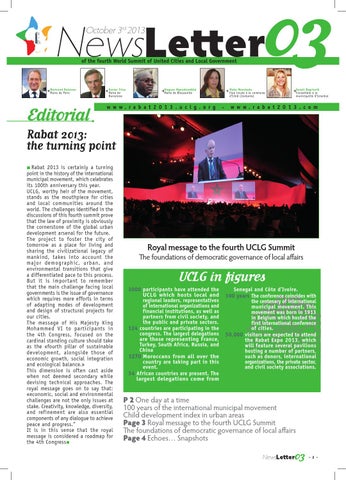 Rabat 2013: the turning point n Rabat 2013 is certainly a turning point in the history of the international municipal movement, which celebrates its 100th anniversary this year. UCLG, worthy heir of the movement, stands as the mouthpiece for cities and local communities around the world. The challenges identified in the discussions of this fourth summit prove that the law of proximity is obviously the cornerstone of the global urban development arsenal for the future. The project to foster the city of tomorrow as a place for living and sharing the civilizational legacy of mankind, takes into account the major demographic, urban, and environmental transitions that give a differentiated pace to this process. But it is important to remember that the main challenge facing local governments is the issue of governance which requires more efforts in terms of adapting modes of development and design of structural projects for our cities. The message of His Majesty King Mohammed VI to participants in the 4th Congress, focused on the cardinal standing culture should take as the «fourth pillar of sustainable development, alongside those of economic growth, social integration and ecological balance.» This dimension is often cast aside when not deemed secondary while devising technical approaches. The royal message goes on to say that: «economic, social and environmental challenges are not the only issues at stake. Creativity, knowledge, diversity, and refinement are also essential components of any dialogue to achieve peace and progress.” It is in this sense that the royal message is considered a roadmap for the 4th Congress●

The foundations of democratic governance of local affairs

‫‏‬UCLG in figures 3000‫‏‬p articipants have attended the UCLG which hosts local and regional leaders, representatives of international organizations and financial institutions, as well as partners from civil society, and the public and private sectors. 124‫ ‏‬countries are participating in the congress. The largest delegations are those representing France, Turkey, South Africa, Russia, and China 1270‫‏‬M oroccans from all over the country are taking part in this event. 34‫ ‏‬African countries are present. The largest delegations come from

Senegal and Côte d’Ivoire. 100‫ ‏‬years The conference coincides with the centenary of international municipal movement. This movement was born in 1913 in Belgium which hosted the first international conference of cities. 50,000‫ ‏‬visitors are expected to attend the Rabat Expo 2013, which will feature several pavilions hosting a number of partners, such as donors, international organizations, the private sector, and civil society associations.

Parallel Session 3.2 Dynamics of change in the Mediterranean

marks a hundred years of existence for the international municipal movement. The holding of the congress of the United Cities and Local Governments coincides with the centenary. Heir to the municipal movement, the UCLG has thus set to trace back the history of the last hundred years of municipal cooperation and practice of local governance. The task at hand is meant to spell out successes and difficulties that marked the history of the movement, as well as the challenges, not leaving out the historic impact and the evolution of the International Municipal Movement. The illustration of this agenda has numerous sociological and political dimensions which marked the last century paved the way for future evolutions of local, territorial collectivities at the onset of the 21st century. T‫ ‏‬he summit is also an opportunity for UCLG key players, international institutions, and all those who contribute to strengthening development cooperation, to share their vision on the movement, reflect on the place that it holds today, and probe the future of international municipal cooperation. I‫ ‏‬t should be noted that the municipal movement has been a catalyst for peace in the aftermath of two world wars. The movement has also played a role in the transformation of the former Soviet countries, and following the fall of the Berlin Wall thanks to the establishment of global ties forged locally and which serve today as a basis for international cooperation. Today the movement is focused on the fight against racism and social exclusion, the struggle for gender equality and the promotion of participatory democracy.

Parallel Session 4.3 Right to the city and fight against urban inequalities

On the occasion of the 4th World Summit of the United Cities and Local Governments (UCLG), held in Rabat, the UNICEF is to unveil the Child development index in urban areas. The index developed to measure children well-being in cities and to ensure that urban development policies integrate the different development dimensions of the citizens of tomorrow: Children and teens. UNICEF says that “the child development index in urban areas’, developed in collaboration with the Global City Indicators facility, which is presented on Friday October 4th, will enable different stakeholders, decision-makers, especially at the city level, to access strategic information to develop, monitor, and assess development policies factoring in the wellbeing of children. The same stakeholders will be called upon to shoulder heavy responsibilities in the coming years. The 2012 UNICEF world report on the Situation of Children said that by 2030, the world urban population will reach 5 billion people, which is 60% of the world population, and this accelerated urbanization will bring decision makers, economic operators and vulnerable populations will raise considerable challenges in terms of quality basic services, jobs, housing, equipment et security. It can also disturb the functioning of the social, economic and environment system● n

fourth UCLG, held in Rabat with the participation of 3700 delegates, kicked off on Wednesday in Rabat in an attempt to reflect on issues related to urbanization, governance, gender, the environment, and the promotion of the quality of life. ‫‏‬The opening ceremony was marked by a royal message which was read out by Mayor of the City of Rabat, Fathallah Oualalou. ‫‏‬In this message, His Majesty the King said Morocco has undertaken fundamental reforms, including the constitutionalization of the advanced regionalization which is meant to establish an integrated territorial organization and which opens a new era in the consolidation process of local democracy, and positioning of local collectivities as a major partner of the state and the private sector in the management of development issues. ‫‏‬It is in this context, reads the royal message, that Morocco has introduced a bold initiative that gives our southern provinces autonomy for the people of the region to democratically manage their local affairs within the framework of the unity of the Kingdom and full sovereignty over its territories. It is an autonomy that takes into account their social and economic characteristics, as well as their authentic culture, which is a tributary of the Moroccan culture unified and plural. ‫‏‬The royal message also stated that « convinced of the need for a consensual and realistic approach in resolving

regional disputes, Morocco has made​​ considerable efforts to give shape to this ambitious initiative, in a broad participatory approach, open onto all national stakeholders, especially the people of the southern provinces of the Kingdom, efforts of which the seriousness and credibility have been repeatedly emphasized by the Security Council. ‫‏‬Addressing the delegates, His Majesty the King said, « You know better than others, elected ladies and gentlemen, that autonomy is a modern and efficient answer to the aspirations of the peoples of the region to achieve reconciliation, promote development and create conditions to live in a climate of freedom, dignity, security and stability ». ‫‏‬After explaining that the constant accession of Morocco to territorial decentralization is reflected especially in the progressive extension of the scope of skills and efforts of local communities so that they can fully assume its mission, HM king said to embody the principle of democratic management of other regions and local authorities, under the new Constitution of the Kingdom, we have gone from the traditional administrative supervision over the actions of these communities, strengthening the system post control of the administrative and financial justice on those communities. They should therefore have greater latitude to make decisions in the context of responsible autonomy and according to the rules and standards governing the rule of law ●

Echoes… ‫ ‏‬ertrand Delanoë, B Mayor of Paris n ‫‏‬We are in need of local

communities, regardless of their differences, in the service of peace in the world. For it is in our cities that we face the challenges of social justice, inclusion, rural development, and diversity. ‫‏‬We had met in Europe, Asia, and Latin America, and now it is of Africa’s, the continent of youth ... in Morocco the country of tolerance ...and in Rabat which has all the assets to be the city of the 21st century while preserving its identity.● Abdellah Baha, Minister of State, Mohand Laenser, Minister of the Interior and Charki Draiss, Deputy Minister to the Minister of the Interior visiting Rabat expo 2013

for local governments to meet periodically and seek coordination, mechanisms because the future of countries lies in cities, but it does not mean that we should not ignore the outskirts which are very important for cities. I think that the future of the economy is in cities. It is very important to have such a network of cities for the exchange of experiences. ●

A delegation of African elects attending the UCLG Congress

n ‫‏‬We have fought within

UCLG for the Africa to be finally recognized. We are proud today to see Rabat hosting this big event. It is an honor for Africa. ‫‏‬We held a big UCLG meeting yesterday and the most important issue on the agenda was decentralization. Once more, I commend the authorities of the Kingdom of Morocco which has done a wonderful job in this area and it shows in the way local collectivities are run in the country. ●

increased from 25% to 37% in a short period of time. Twothirds of those elected are women who have proved their mettle. Women were elected several times which reflects the trust voters had in them●

Entrance of the Rabat expo marquee

Serpil Bagriacik, Advisor to the Istanbul Municipality nAll over the world, women in Turkey are struggling to be heard.

However, things have changed. The government applies a quota for women, but it remains very low, at 14 pc in the parliament while women are represented by only 3 pc at the local level. The metropolis of Istanbul is represented by 60 people, including 26 women only. This summit allows us to create an amazing network to promoting solidarity.●