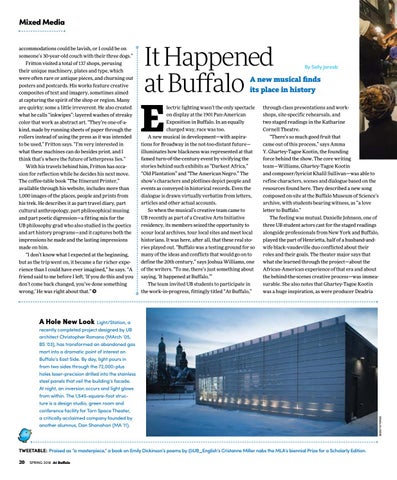 Mixed Media accommodations could be lavish, or I could be on someone’s 30-year-old couch with their three dogs.” Fritton visited a total of 137 shops, perusing their unique machinery, plates and type, which were often rare or antique pieces, and churning out posters and postcards. His works feature creative composites of text and imagery, sometimes aimed at capturing the spirit of the shop or region. Many are quirky; some a little irreverent. He also created what he calls “inkwipes”: layered washes of streaky color that work as abstract art. “They’re one-of-akind, made by running sheets of paper through the rollers instead of using the press as it was intended to be used,” Fritton says. “I’m very interested in what these machines can do besides print, and I think that’s where the future of letterpress lies.” With his travels behind him, Fritton has occasion for reflection while he decides his next move. The coffee-table book “The Itinerant Printer,” available through his website, includes more than 1,000 images of the places, people and prints from his trek. He describes it as part travel diary, part cultural anthropology, part philosophical musing and part poetic digression—a fitting mix for the UB philosophy grad who also studied in the poetics and art history programs—and it captures both the impressions he made and the lasting impressions made on him. “I don’t know what I expected at the beginning, but as the trip went on, it became a far richer experience than I could have ever imagined,” he says. “A friend said to me before I left, ‘If you do this and you don’t come back changed, you’ve done something wrong.’ He was right about that.”

It Happened at Buffalo

A new musical finds its place in history

lectric lighting wasn’t the only spectacle on display at the 1901 Pan-American Exposition in Buffalo. In an equally charged way, race was too. A new musical in development—with aspirations for Broadway in the not-too-distant future— illuminates how blackness was represented at that famed turn-of-the-century event by vivifying the stories behind such exhibits as “Darkest Africa,” “Old Plantation” and “The American Negro.” The show’s characters and plotlines depict people and events as conveyed in historical records. Even the dialogue is drawn virtually verbatim from letters, articles and other actual accounts. So when the musical’s creative team came to UB recently as part of a Creative Arts Initiative residency, its members seized the opportunity to scour local archives, tour local sites and meet local historians. It was here, after all, that these real stories played out. “Buffalo was a testing ground for so many of the ideas and conflicts that would go on to define the 20th century,” says Joshua Williams, one of the writers. “To me, there’s just something about saying, ‘It happened at Buffalo.’” The team invited UB students to participate in the work-in-progress, fittingly titled “At Buffalo,”

through class presentations and workshops, site-specific rehearsals, and two staged readings in the Katharine Cornell Theatre. “There’s so much good fruit that came out of this process,” says Amma Y. Ghartey-Tagoe Kootin, the founding force behind the show. The core writing team—Williams, Ghartey-Tagoe Kootin and composer/lyricist Khalil Sullivan—was able to refine characters, scenes and dialogue based on the resources found here. They described a new song composed on-site at the Buffalo Museum of Science’s archive, with students bearing witness, as “a love letter to Buffalo.” The feeling was mutual. Danielle Johnson, one of three UB student actors cast for the staged readings alongside professionals from New York and Buffalo, played the part of Henrietta, half of a husband-andwife black-vaudeville duo conflicted about their roles and their goals. The theater major says that what she learned through the project—about the African-American experience of that era and about the behind-the-scenes creative process—was immeasurable. She also notes that Ghartey-Tagoe Kootin was a huge inspiration, as were producer Deadria

A Hole New Look Light/Station, a

TWEETABLE: Praised as “a masterpiece,” a book on Emily Dickinson’s poems by @UB_English’s Cristanne Miller nabs the MLA’s biennial Prize for a Scholarly Edition. 20

recently completed project designed by UB architect Christopher Romano (MArch ’05, BS ’03), has transformed an abandoned gas mart into a dramatic point of interest on Buffalo’s East Side. By day, light pours in from two sides through the 72,000-plus holes laser-precision drilled into the stainless steel panels that veil the building’s facade. At night, an inversion occurs and light glows from within. The 1,545-square-foot structure is a design studio, green room and conference facility for Torn Space Theater, a critically acclaimed company founded by another alumnus, Dan Shanahan (MA ’11).

At Buffalo is the quarterly magazine for alumni and friends of the University at Buffalo. 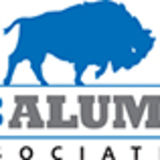