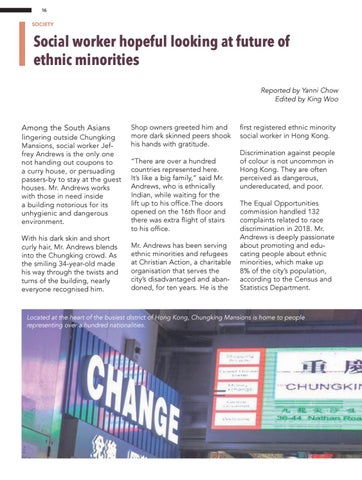 Among the South Asians lingering outside Chungking

Mansions, social worker Jeffrey Andrews is the only one not handing out coupons to a curry house, or persuading passers-by to stay at the guest houses. Mr. Andrews works with those in need inside a building notorious for its unhygienic and dangerous environment. With his dark skin and short curly hair, Mr. Andrews blends into the Chungking crowd. As the smiling 34-year-old made his way through the twists and turns of the building, nearly everyone recognised him.

Shop owners greeted him and more dark skinned peers shook his hands with gratitude. “There are over a hundred countries represented here. It’s like a big family,” said Mr. Andrews, who is ethnically Indian, while waiting for the lift up to his office.The doors opened on the 16th floor and there was extra flight of stairs to his office. Mr. Andrews has been serving ethnic minorities and refugees at Christian Action, a charitable organisation that serves the city’s disadvantaged and abandoned, for ten years. He is the

first registered ethnic minority social worker in Hong Kong. Discrimination against people of colour is not uncommon in Hong Kong. They are often perceived as dangerous, undereducated, and poor. The Equal Opportunities commission handled 132 complaints related to race discrimination in 2018. Mr. Andrews is deeply passionate about promoting and educating people about ethnic minorities, which make up 8% of the city’s population, according to the Census and Statistics Department.

Located at the heart of the busiest district of Hong Kong, Chungking Mansions is home to people representing over a hundred nationalities.

To reflect the intensity of the local unrest, we have explored the hardships faced by Hong Kong’s ethnic minorities through a social worker and by Singaporean exchange students who are profoundly saddened to see local campuses being turned into war zones. We also have a series of stories about Rwanda after a team went on an expedition through African jungles and Rwandese museums. Once a country torn by genocide, we examined how Rwanda has healed from trauma and preserved their culture and history. 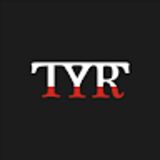