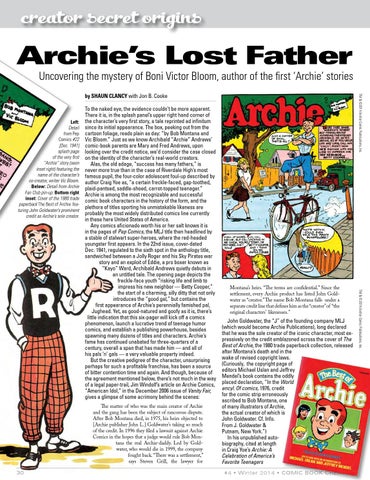 Uncovering the mystery of Boni Victor Bloom, author of the first ‘Archie’ stories

The matter of who was the main creator of Archie and the gang has been the subject of rancorous dispute. After Bob Montana died, in 1975, his heirs objected to [Archie publisher John L.] Goldwater’s taking so much of the credit. In 1996 they filed a lawsuit against Archie Comics in the hopes that a judge would rule Bob Montana the real Archie-daddy. Led by Goldwater, who would die in 1999, the company fought back. “There was a settlement,” says Steven Grill, the lawyer for 30

Montana’s heirs. “The terms are confidential.” Since the settlement, every Archie product has listed John Goldwater as “creator.” The name Bob Montana falls under a separate credit line that defines him as the “creator” of “the original characters’ likenesses.”

John Goldwater, the “J” of the founding company MLJ (which would become Archie Publications), long declared that he was the sole creator of the iconic character, most expressively on the credit emblazoned across the cover of The Best of Archie, the 1980 trade paperback collection, released after Montana’s death and in the wake of revised copyright laws. (Curiously, the copyright page of editors Michael Uslan and Jeffrey Mendel’s book contains the oddly placed declaration, “In the World encyl. Of comics, 1976, credit for the comic strip erroneously ascribed to Bob Montana, one of many illustrators of Archie, the actual creator of which is John Goldwater. Cf. Info. From J. Goldwater & Putnam, New York.”) In his unpublished autobiography, cited at length in Craig Yoe’s Archie: A Celebration of America’s Favorite Teenagers #4 • Winter 2014 • Comic Book Creator

To the naked eye, the evidence couldn’t be more apparent. There it is, in the splash panel’s upper right hand corner of the character’s very first story, a tale reprinted ad infinitum since its initial appearance. The box, peeking out from the cartoon foliage, reads plain as day: “by Bob Montana and Vic Bloom.” Just as we know Archibald “Archie” Andrews’ comic-book parents are Mary and Fred Andrews, upon looking over the credit notice, we’d consider the case closed on the identity of the character’s real-world creators. Alas, the old adage, “success has many fathers,” is never more true than in the case of Riverdale High’s most famous pupil, the four-color adolescent foul-up described by author Craig Yoe as, “a certain freckle-faced, gap-toothed, plaid-pantsed, saddle-shoed, carrot-topped teenager.” Archie is among the most recognizable and successful comic book characters in the history of the form, and the plethora of titles sporting his unmistakable likeness are probably the most widely distributed comics line currently in these here United States of America. Any comics aficionado worth his or her salt knows it is in the pages of Pep Comics, the MLJ title then headlined by a stable of stalwart super-heroes, where the red-headed youngster first appears. In the 22nd issue, cover-dated Dec. 1941, regulated to the sixth spot in the anthology title, sandwiched between a Jolly Roger and his Sky Pirates war story and an exploit of Eddie, a pro boxer known as “Kayo” Ward, Archibald Andrews quietly debuts in an untitled tale. The opening page depicts the freckle-face youth “risking life and limb to impress his new neighbor — Betty Cooper,” the start of a charming, silly ditty that not only introduces the “good gal,” but contains the first appearance of Archie’s perennially famished pal, Jughead. Yet, as good-natured and goofy as it is, there’s little indication that this six-pager will kick off a comics phenomenon, launch a lucrative trend of teenage humor comics, and establish a publishing powerhouse, besides spawning many dozens of titles and characters. Archie’s fame has continued unabated for three-quarters of a century, overall a span that has made him — and all of his pals ’n’ gals — a very valuable property indeed. But the creative pedigree of the character, unsurprising perhaps for such a profitable franchise, has been a source of bitter contention time and again. And though, because of the agreement mentioned below, there’s not much in the way of a legal paper-trail, Jim Windolf’s article on Archie Comics, “American Idol,” in the December 2006 issue of Vanity Fair, gives a glimpse of some acrimony behind the scenes:

by SHAUN CLANCY with Jon B. Cooke 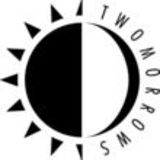 COMIC BOOK CREATOR #4 gets rambunctiously rustic with rowdy RUSS HEATH in a wide-ranging, comprehensive interview with the superb comic book...

COMIC BOOK CREATOR #4 gets rambunctiously rustic with rowdy RUSS HEATH in a wide-ranging, comprehensive interview with the superb comic book...