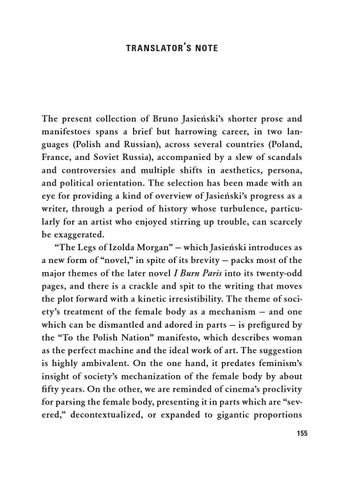 The present collection of Bruno Jasieński’s shorter prose and manifestoes spans a brief but harrowing career, in two languages (Polish and Russian), across several countries (Poland, France, and Soviet Russia), accompanied by a slew of scandals and controversies and multiple shifts in aesthetics, persona, and political orientation. The selection has been made with an eye for providing a kind of overview of Jasieński’s progress as a writer, through a period of history whose turbulence, particularly for an artist who enjoyed stirring up trouble, can scarcely be exaggerated. “The Legs of Izolda Morgan” — which Jasieński introduces as a new form of “novel,” in spite of its brevity — packs most of the major themes of the later novel I Burn Paris into its twenty-odd pages, and there is a crackle and spit to the writing that moves the plot forward with a kinetic irresistibility. The theme of society’s treatment of the female body as a mechanism — and one which can be dismantled and adored in parts — is prefigured by the “To the Polish Nation” manifesto, which describes woman as the perfect machine and the ideal work of art. The suggestion is highly ambivalent. On the one hand, it predates feminism’s insight of society’s mechanization of the female body by about fifty years. On the other, we are reminded of cinema’s proclivity for parsing the female body, presenting it in parts which are “severed,” decontextualized, or expanded to gigantic proportions 155

(in the close-up) for the erotic satisfaction of audiences. Berg’s obsession with Izolda’s legs only shifts this cinematic fetish. Film critic Siegfried Kracauer once wrote that the power of the cinematic fragment is in how it leaves us longing for and anticipating the larger whole; Berg’s case, however, represents a reversal. His possession of Izolda’s legs is fulfillment enough — the rest of the body swiftly turns out to be a useless appendage, beneath his attention. Yet like any great writer, Jasieński’s politics consistently undermine themselves, rendering any conclusive reading disturbingly elusive. By the novella’s end it is impossible to say where it is set: in Berg’s deranged mind, in a world run amok, or perhaps the distinction has become entirely irrelevant. “Keys,” written in 1925 when Jasieński was twenty-four years old, forms a bridge of sorts from his Futurist period to his later satirical work. Instead of the page-long sentences it has a staccato, almost perfunctory feel, and until recently it had been omitted from Polish anthologies of his work. Nonetheless, its attack on religious hypocrisy was quite bold in the arch-Catholic Poland of the 1920s, and its tone of moral outrage anticipates his later work. The more laconic the prose becomes, the more appalling the narrative. The effect is somewhat complex — in giving an absurdly terse commentary on the events, the narrator creates the impression of a world where ethical insanity is met with complicity or bland indifference. This implicit worldview is one of the few constants in Jasieński’s highly varied oeuvre. The two novellas “The Nose” and “The Chief Culprit” were both written in Russian in 1936 when Jasieński was living in Moscow. Composed around the time when Stalin’s Great Purge 156

was getting underway, they are examples of how “officially sanctioned” themes could be used to subversive and defiantly literary ends. Though Jasieński was known as a firebrand, and there is evidence that he was involved in denouncing other writers, it should be remembered that as a high-profile Pole — albeit one who had repeatedly attacked his home country’s sacred cows and who was now writing in Russian and supporting the Soviet cause — he would have been a natural target for persecution (no one knows how many Poles died as a result of the Great Purge, but the number is estimated to be in the hundreds of thousands). Thus the themes of these novellas are “safe”: the evil of Nazi Germany’s racial policies and the dehumanization of life in Poland’s army, legal system, and society at large. What keeps these texts from becoming heavy-handed or didactic, however, is Jasieński’s evident glee in skewering his targets. “The Nose” advertises its indebtedness to Gogol in the title and epigraph, and can very well be read as a fantasia on the idea of Gogol’s runaway nose infecting the world to a murderous and brutal extent married to the Nazi obsession for phrenological research and physiological classification. What does it mean, after all, that a man lives or dies for the shape of his nose? In Gogol’s famous story, the nose grows to vast proportions, is clothed in noble robes, and acquires, literally, a life of its own. Jasieński’s story describes a similar phenomenon, with a great scrupulousness to historical fact — the various cited academics and scientists and their work are as genuine as they are bizarre. One finds an analogy for “The Chief Culprit” in Nathanael West’s A Cool Million: The Dismantling of Lemuel Pitkin, which, as in Jasieński’s story, takes the physical mutilation of a young, 157

bright-eyed naif to hideous extremes. The protagonist learns that the mundane life he once knew, his work in the bank, was at best an illusion, and that the real substance of life in a capitalist society rears its murderous head in times of war and in endless preparation for the war to come — and one is always on the horizon. Jasieński’s message that in modern war the ordinary civilian is the “chief culprit” — and thus the primary enemy — naturally has its antecedents and only became more relevant with the increasing destructive power of weaponry. The fantasy cities to help citizens survive modern warfare are obviously satire, but they also harken back to a pre-modern world where towns were created as defensive structures. What has changed in the meantime are the weapons themselves, which require the city of the future to take more fantastic precautions. In the early 1920s, avant-garde manifestoes flashed into existence and expired, one after another, at a furious pace. The two included here are foundational to the Polish Futurist movement and display the phonetic, “barbaric” approach to spelling. For “Nife in the Gutt” I have attempted to render Jasieński’s phoneticizations and deliberate misspellings in a reasonable English equivalent that is nevertheless, hopefully, intelligible. After consulting with the editor, I decided to translate “To the Polish Nation” without the Futurist spellings but with the conviction that the content deserves clarity and a reader whose attention is not focused on spelling. It is probably fair to say that this mangling of language would have been considered just as controversial as the contents of the manifestoes themselves, but it was also unmistakably a declaration. A revolution in art demanded a whole new approach to language, and if some might 158

find the solution in these manifestoes unpleasantly literal, it was a mandate that Jasieński carried over into “The Legs of Izolda Morgan” and I Burn Paris in a much more compelling and intricate form. This volume contains most of the shorter prose Jasieński committed to paper in Russian and in Polish; omitted are a few short manifestoes that too specifically target the Polish language (and its mutilation) to be of much use to the English-language reader, and one story in Russian entitled “Bravery,” whose propagandistic qualities outweigh its literary merits. He also wrote a pair of novels in Russian, one of which was left unfinished. It is a rare pleasure as a translator to wish that a writer had had time to write more, to feel unsated with the remaining work to translate, to be actually left with the sensation that he will miss translating this author. Invaluable contributions to the translations were made by Marcin Piekoszewski (for “The Legs of Izolda Morgan”) and Howard Sidenberg (throughout). I am also grateful to my cotranslator, Guy Torr, for his enthusiasm and skill in taking on Jasieński’s Russian texts. Soren Gauger Krakow, 2014 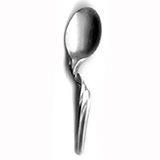