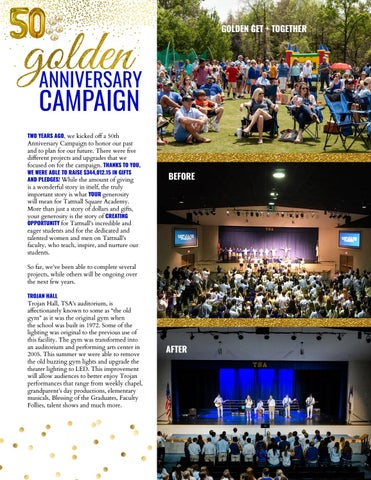 TWO YEARS AGO, we kicked off a 50th

Anniversary Campaign to honor our past and to plan for our future. There were five different projects and upgrades that we focused on for the campaign. THANKS TO YOU, WE WERE ABLE TO RAISE $344,012.15 IN GIFTS AND PLEDGES! While the amount of giving

is a wonderful story in itself, the truly important story is what YOUR generosity will mean for Tattnall Square Academy. More than just a story of dollars and gifts, your generosity is the story of CREATING OPPORTUNITY for Tattnall’s incredible and eager students and for the dedicated and talented women and men on Tattnall’s faculty, who teach, inspire, and nurture our students.

So far, we’ve been able to complete several projects, while others will be ongoing over the next few years. TROJAN HALL

Trojan Hall, TSA’s auditorium, is affectionately known to some as “the old gym” as it was the original gym when the school was built in 1972. Some of the lighting was original to the previous use of this facility. The gym was transformed into an auditorium and performing arts center in 2005. This summer we were able to remove the old buzzing gym lights and upgrade the theater lighting to LED. This improvement will allow audiences to better enjoy Trojan performances that range from weekly chapel, grandparent’s day productions, elementary musicals, Blessing of the Graduates, Faculty Follies, talent shows and much more.

BEFORE STUDENT FURNITURE- CLASSROOM AND CAFETERIA

The original part of the cafeteria was built in 1974. Over the years, we have expanded and refurbished the location to accommodate our growing school. The TSA Cafe, also known as the cafeteria, received an update last summer when all of the 20 year old furniture was replaced with beautiful new seating and tables. Some unique features in the cafeteria now are the booths that anchor the center of the lunchroom along with a couple of large high top tables.

Next, we will turn our focus to replacing all of the student desks and chairs in the classrooms. Understandably, classroom furniture receives a great deal of wear and tear throughout the year. To ensure the safety of our students, we plan to replace all the desks in middle and upper school classrooms. Desks have already been replaced in the upper elementary grades, and future plans for the lower school include purchasing all new chairs for those classrooms. This will be an ongoing project until all rooms are equipped.

In the fall of 1988, TSA hosted its first game on Trojan Trail, the same year the Trojans earned the schoolâ&#x20AC;&#x2122;s first GISA State Championship. We focused our resources on refurbishing several areas of the football complex that include overhauling the track and renovating the press box. We have completed renovations to the press box that include upgrades such as air conditioning, larger windows, an improved upper deck for news crews and filming, and a complete face lift to the exterior. Due to circumstances outside TSAâ&#x20AC;&#x2122;s control, the condition of the track had deteriorated much earlier than expected resulting in the inability to use the track for competitive meets. As safety remains in the forefront of our efforts, overhauling the track was a priority. Completed at the end of the summer, the project included foundational work to the surface, striping and other similar processes. Currently there are no plans to rubberize the track.

Children learn more effectively when the tools of technology are incorporated into their lessons, and educational institutions now require robust systems to support every aspect of operations. Our goal is to implement a comprehensive technology program that enhances the learning process and facilitates school-wide administrative functions. Staying current with rapidly changing technologies is an ongoing challenge, and we must devote considerable resources to maintaining and upgrading our systems as well as add new technologies when appropriate. The technology component of the campaign will provide iPads for each faculty member, interactive boards in all classrooms, a Chromebook Cart (30), Adobe Creative Cloud, and wireless network and infrastructure enhancements. Currently, we have ten interactive boards to various classrooms, and the Adobe Creative Cloud software that is available to all students and staff. The technology and equipment project is an ongoing project that will continually grow as funds become available from pledges. PE GYM

Over the years the P.E. gym has been the home for basketball games and pep rallies. Currently, it is used for all elementary P.E. classes as well as the home court for some middle school basketball games and some special events, such as Grandparentsâ&#x20AC;&#x2122; Day. This gym is in a high traffic area and requires refurbishment to showcase its history. Renovation needs include paint, insulation, and flooring. To ensure the safety of our Trojans, we have added these upgrades to our Golden Anniversary Campaign efforts. These efforts will be finished as pledges are completed. None of these things would be possible without the support of all of YOU who bleed Blue & Gold! The founding families and church members would take pleasure in knowing that their original vision for this very special school was being supported by your generosity nearly 50 years after they made their own personal commitment. It is a timeless and important partnership. THANK YOU for continuing to make Tattnall

the Best of the Best! 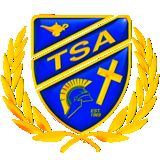