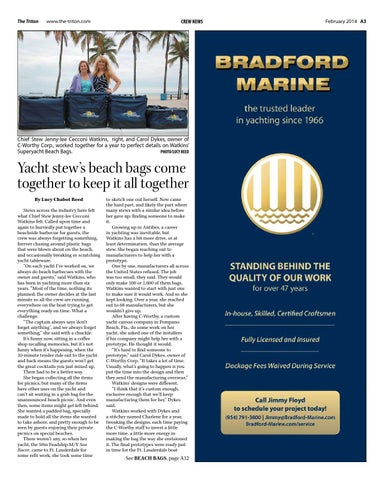 Yacht stew’s beach bags come together to keep it all together By Lucy Chabot Reed Stews across the industry have felt what Chief Stew Jenny-lee Cecconi Watkins felt. Called upon time and again to hurriedly put together a beachside barbecue for guests, the crew was always forgetting something, forever chasing around plastic bags that were blown about on the beach, and occasionally breaking or scratching yacht tableware. “On each yacht I’ve worked on, we always do beach barbecues with the owner and guests,” said Watkins, who has been in yachting more than six years. “Most of the time, nothing its planned; the owner decides at the last minute so all the crew are running everywhere on the boat trying to get everything ready on time. What a challenge. “The captain always says ‘don’t forget anything’, and we always forget something,” she said with a chuckle. It’s funny now, sitting in a coffee shop recalling memories, but it’s not funny when it’s happening, when the 10-minute tender ride out to the yacht and back means the guests won’t get the great cocktails you just mixed up. There had to be a better way. She began collecting all the items for picnics, but many of the items have other uses on the yacht and can’t sit waiting in a grab bag for the unannounced beach picnic. And even then, some items might get left behind. She wanted a padded bag, specially made to hold all the items she wanted to take ashore, and pretty enough to be seen by guests enjoying their private picnics on special beaches. There weren’t any, so when her yacht, the 50m Feadship M/Y Sea Racer, came to Ft. Lauderdale for some refit work, she took some time

to sketch one out herself. Now came the hard part, and likely the part where many stews with a similar idea before her gave up: finding someone to make it. Growing up in Antibes, a career in yachting was inevitable, but Watkins has a bit more drive, or at least determination, than the average stew. She began reaching out to manufacturers to help her with a prototype. One by one, manufacturers all across the United States refused. The job was too small, they said. They would only make 100 or 1,000 of them bags. Watkins wanted to start with just one to make sure it would work. And so she kept looking. Over a year, she reached out to 68 manufacturers, but she wouldn’t give up. After having C-Worthy, a custom yacht canvas company in Pompano Beach, Fla., do some work on her yacht, she asked one of the installers if his company might help her with a prototype. He thought it would. “It’s hard to find someone to prototype,“ said Carol Dykes, owner of C-Worthy Corp. “It takes a lot of time. Usually, what’s going to happen is you put the time into the design and then they send the manufacturing overseas.” Watkins’ designs were different. “I think that it’s custom enough, exclusive enough that we’ll keep manufacturing them for her,” Dykes said. Watkins worked with Dykes and a stitcher named Charlene for a year, tweaking the designs, each time paying the C-Worthy staff to invest a little more time, a little more energy in making the bag the way she envisioned it. The final prototypes were ready just in time for the Ft. Lauderdale boat 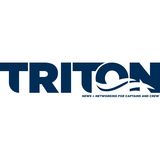 Monthly publication with nautical news for captains and crew on megayachts.

Monthly publication with nautical news for captains and crew on megayachts.