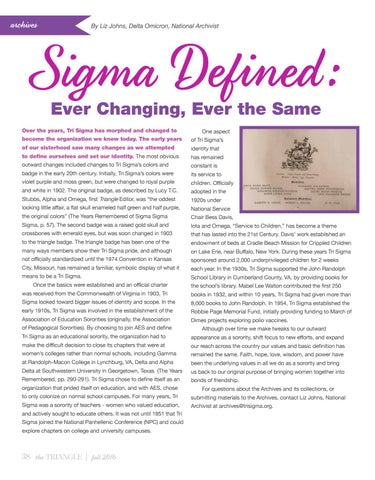 Sigma Defined: Ever Changing, Ever the Same

Over the years, Tri Sigma has morphed and changed to become the organization we know today. The early years of our sisterhood saw many changes as we attempted to define ourselves and set our identity. The most obvious outward changes included changes to Tri Sigma’s colors and

violet purple and moss green, but were changed to royal purple

and white in 1902. The original badge, as described by Lucy T.C. Stubbs, Alpha and Omega, first Triangle Editor, was “the oddest

looking little affair, a flat skull enameled half green and half purple, the original colors” (The Years Remembered of Sigma Sigma

Sigma, p. 57). The second badge was a raised gold skull and

many ways members show their Tri Sigma pride, and although not officially standardized until the 1974 Convention in Kansas

City, Missouri, has remained a familiar, symbolic display of what it means to be a Tri Sigma.

Once the basics were established and an official charter

was received from the Commonwealth of Virginia in 1903, Tri

Sigma looked toward bigger issues of identity and scope. In the early 1910s, Tri Sigma was involved in the establishment of the Association of Education Sororities (originally, the Association

of Pedagogical Sororities). By choosing to join AES and define Tri Sigma as an educational sorority, the organization had to make the difficult decision to close its chapters that were at

women’s colleges rather than normal schools, including Gamma at Randolph-Macon College in Lynchburg, VA, Delta and Alpha

Delta at Southwestern University in Georgetown, Texas (The Years Remembered, pp. 290-291). Tri Sigma chose to define itself as an organization that prided itself on education, and with AES, chose

to only colonize on normal school campuses. For many years, Tri

Sigma was a sorority of teachers - women who valued education,

and actively sought to educate others. It was not until 1951 that Tri

Sigma joined the National Panhellenic Conference (NPC) and could explore chapters on college and university campuses.

of Tri Sigma’s identity that

has remained constant is

children. Officially adopted in the 1920s under

Iota and Omega, “Service to Children,” has become a theme

that has lasted into the 21st Century. Davis’ work established an

endowment of beds at Cradle Beach Mission for Crippled Children on Lake Erie, near Buffalo, New York. During these years Tri Sigma sponsored around 2,000 underprivileged children for 2 weeks

each year. In the 1930s, Tri Sigma supported the John Randolph

Although over time we make tweaks to our outward

appearance as a sorority, shift focus to new efforts, and expand

our reach across the country our values and basic definition has remained the same. Faith, hope, love, wisdom, and power have been the underlying values in all we do as a sorority and bring

us back to our original purpose of bringing women together into bonds of friendship.

For questions about the Archives and its collections, or

Read about Convention, the new Tri Sigma brand, and chapter news in the fall 2016 issue of The Triangle. 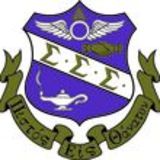