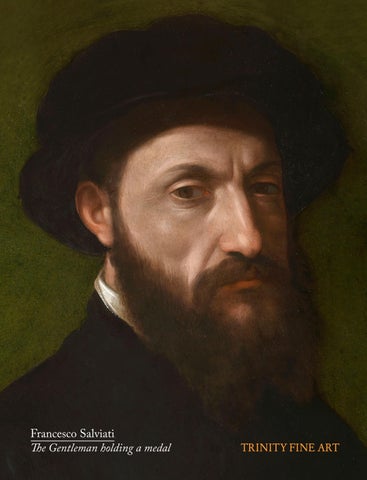 he long “Vita” which Giorgio Vasari devotes to Francesco Salviati1 reveals that the painter already enjoyed a solid reputation among his contemporaries, causing him to become one of the most highly

praised artists of the mid-16th century. His renown is due in part to his vast fresco output but also to his numerous portraits, thus we may consider him to be one of the most important exponents of the genre in the fitting company of his contemporaries Bronzino and Pontormo. Salviati’s work is found in the world’s leading museums, including the Galleria degli Uffizi in Florence, the Pinacoteca di Brera in Milan, the Musée du Louvre in Paris, the Kunsthistorisches Museum in Vienna, the Metropolitan Museum of Art in New York, the National Gallery of Art in Washington, the John and Mable Ringling Museum of Art in Sarasota and the Saint Louis Art Museum in Saint Louis. ❡❡❡ No mid-16th century painter proved as adept as Francesco Salviati in absorbing the influences of Florence, Rome and Venice in the space of only a few years. His career was a sum of sudden changes in style which, particularly in his portraiture, occasionally took the shape of abrupt changes of course. The difficulties implicit in the topic have been lucidly outlined by Philippe Costamagna in his essay on portraits for the exhibition entitled Francesco Salviati o la Bella Maniera held in 1998 in the Villa Medici in Rome and subsequently in the Louvre2. Taking their cue from the work of Luisa Mortari3, which has been used as

a starting point for rethinking the catalogue of Francesco Salviati’s painting and more especially of his portraits, scholars have attempted to grapple with the topic on more than one occasion, often adopting restrictive criteria and helped also by greater familiarity with the work of other artists, first and foremost with the work of Michele Tosini, to whom many of the paintings

once assigned to Salviati are now given4. If we run through the list of portraits attributed to Salviati, we are inevitably left with a sense of stylistic variety that perhaps only an exhibition placing all of his various paintings in

sequence might dispel. As things stand today, at any rate, we can only add pieces to a puzzle that some comprehensive future assessment alone will be able to capture in all of its multiple facets. 5

P. Costamagna, Il ritrattista, in C. Monbeig Goguel (ed.), Francesco Salviati o la Bella Maniera, catalogue of the exhibition held in Rome and Paris in1998, Milan 1998, pp. 47-52. The problematic nature of the topic is highlighted also by the absence of any further study after the 1998 exhibition, either in the proceedings of the eponymous conference or in any art literature published thereafter, where no comprehensive study of the topic has been published despite the various additions to the artist’s catalogue.

Our painting, on slate, was first attributed to Francesco Salviati by Catherine Monbeig Goguel in an article written in honour of Luisa Mortari in 20045. Since it is clearly an autograph work, we can only attempt to place it more accurately in the difficult catalogue of Francesco Salviati’s portraiture. In presenting the work, Goguel associated it with another portrait, now in the Musée Fabre in Montpellier, which Michael Hirst had attributed to Salviati (fig.1).

Especially such works as the Portrait of a Young Man with a Letter in the Uffizi (inv. 1890 n. 1581) which, despite its extremely lofty quality, is distinct from Salviati’s work on account of its more multifaceted, almost choppy style that is thoroughly Florentine in origin.

Salviati painted that picture, which is oval in shape, also on slate – a support that was particularly fashionable in Rome thanks to the example set by Sebastiano del Piombo, who began to use it on his return to the city in 1529 after the Sack of Rome. But while they are both on slate, the two portraits do not seem to us to coincide in stylistic terms, which is why we would suggest somewhat different dates for them. The Montpellier slate, though in a poor

state of conservation, is more fluid in its brushwork and freer in defining the folds of the garment and the face of the sitter, a sculptor who holds in his hands a bozzetto, or trial run, now in the Casa Buonarroti). In the painting under examination here, on the other hand, the figure is built to an altogether stiffer and more monumental design. Though the result may be fluid and elegant, for instance in the bust’s lute-like shape, its plastic, almost chiselled

solidity prompts us to date it to an earlier moment in his career. Thus we may confidently state that the sitter’s features, austere and shadowy yet naturalistic and sophisticated in the interplay between light and shade on his skin, his rosy complexion contrasting with his dark beard, point to a date some time before the mid-1540s, which is the date usually given for the Montpellier slate. The painting under discussion here, on the other hand, may have been painted

when Salviati had already completed his work in Venice, yet before the journey that was to bring him back to Florence for the decoration of Palazzo Vecchio (on which he worked from 1543 to 1548). The Montpellier painting’s freer and more painterly brushwork, despite the slate support, seems to indicate that it is later in date than the Portrait of Cardinal Rodolfo Pio da Carpi (fig. 2) which is generally dated to 1541, in other words around the time that Salviati travelled to Florence. A comparison with the portrait of Rodolfo Pio da Carpi now in Vienna, on the other hand, allows us to suggest a specific date for the painting under examination here. The initial attribution of the Vienna portrait to Sebastiano del Piombo, quite rightly disputed by Michael Hirst, reveals, if nothing else, the

extent to which the primary model to which Salviati turned for his portraits (until 1538, when he was working with Jacopino del Conte on the Oratorio di San Giovanni Decollato) was precisely Del Piombo. Rather than the free and sparkling painting of the Vienna portrait, it is the austere and monumental design of Rodolfo Pio’s face and the simplified, sculpted feel of his moiré silk mantle that is reminiscent beyond all question of Del Piombo’s style. This is in effect the same style that we find in our oval portrait, where the artist’s debt to Sebastiano del Piombo is even greater on account of the slate support which crystalises the paint, forcing the artist to use smooth, firm brush strokes. Also, the man’s face with its austere nose and almost gruff expression displays firm 9

draughtsmanship and a steady control of the figure’s statuary volumes. Yet features typical of Salviati are his invariably restless profiles (one has but to look at the sitter’s cap with its fluidly undulating brim) or the design of the ear and the juxtaposition between the white ruff and the dark doublet. If we carefully observe the doublet, which at first sight almost appears to be dulled cuirass, we can see the free brush strokes in black on black added to define the volume of the arm that stands out against the oval bust support by a belt at the waist in accordance with a style which seems to herald the Montpellier slate. Another typical feature of Salviati’s art is the vibrant design of the white cuff,

barely crinkled and trembling, which appears to be almost identical to the cuff in the so-called Portrait of a Goldsmith, exhibit no, 83 in Francesco Salviati, o la Bella Maniera6. ❡❡❡ Dating this oval portrait to some time between 1535 and 1538, immediately

before the Visitation which Salviati painted in the Oratorio di San Giovanni Decollato, would also explain a clear similarity with the firmer, more rigid style

of Jacopino del Conte, who had already frescoed the Annunciation to Zachary in the oratory by that date. Del Conte was influenced by the same Florentine roots as Salviati and also by the late-Raphaelesque manner of Perin del Vaga, and in 1538 he was working alongside Salviati on the Preaching of St. John the Baptist, in which he built a number of portraits into the sombre, chiselled design – portraits which, while rough and powerful, fail to achieve the elegance of design that we find in Salviati’s work and in this oval portrait.

Also the similarity in the sitter’s pose, with his right hand raised and holding a medal bearing a maxim of ethical inspiration7, which we find in another oval portrait of a man known only from a photograph and formerly in Berlin (fig.

5), appears to point to a connection between the two artists, but also to the superiority of this painting over the Berlin picture. Precisely the painting that can no longer be found today shows a clear affinity with a small portrait of a man 11

The maxim (che chi / muore onorato / vive sempre) written on the medal which the man is holding in his hands alludes to the moral austerity and honourable conduct that ensure one’s immortal memory with posterity. While no precisely matching source has been found, similar values might be paraphrased in a passage in Cicero’s Lelius sive de amicitia (23):”... tantus eos honos, memori?, desiderium prosequitur amicorum. Ex quo illorum beata mors videtur, horum vita laudabilis”. Although the maxim does not refer explicitly to friendship, the nature of the portrait appears to be compatible with the austere ethic of Ciceronian inspiration

For the painting formerly in the Schäffer collection in Berlin see the entry in Mortari, op. cit., p. 153, n. 137, which opposes its attribution to Salviati; see also A. Donati, Michelangelo Buonarroti, Jacopino del Conte, Daniele Ricciarelli. Ritratto e figura nel Manierismo a Roma, San Marino 2010, fig. 205 where the picture is given to Jacopino; and finally, see the essay by Costamagna, Il ritrattista, in Francesco Salviati o la Bella Maniera, op. cit., p. 49, where the small portrait painted on a circular piece of antique marble is dated 1548. 8

painted on a circular stone and quite rightly attributed to Salviati by Philippe Costamagna (fig. 6)8. The man’s face is identical, as is the characterisation of his expression. Only a proper inspection of the oval formerly in Berlin would allow us to understand whether that work, too, should not be given to Salviati himself rather than to Jacopino. But getting back to this portrait on slate, we would argue, therefore, that it is unnecessary to wait for Salviati to have completed the decoration in the Chigi Chapel left unfinished by Sebastiano del Piombo in 1547 before he followed del Piombo’s lead in using slate. Del Piombo had been painting pictures on slate in Rome as early as the late 1520s and Salviati may thus have been very familiar with them from the moment he began, in that city, to move beyond the rigid confines of Florentine draughtsmanship and to show an interest in other models, as seems clear in this painting on slate. And finally, a date for this portrait corresponding to his early days in Rome appears to be borne out by the sitter’s almost slanted eyes and the austerity of his features, which may be compared in stylistic terms with those in a drawing known for sure to be by Salviati and now in the Département des Arts graphiques in the Louvre (inv. 2760, fig. 7). Philippe Costamagna has associated the drawing with the Portrait of a Lutenist in the Musée Jacquemart-André, a painting which, despite its poor state of conservation, testifies nonetheless to Salviati’s early portraiture at the time of his transfer from Florence to Rome. We are grateful to Carlo Falciani for the information in the entry. Falciani has confirmed the attribution to Salviati following first hand inspection of the painting 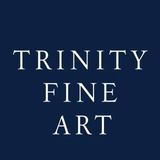