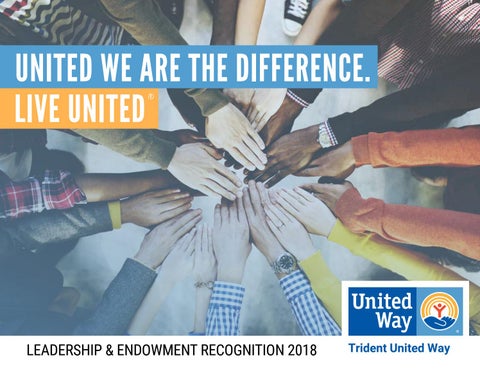 UNITED WE ARE THE DIFFERENCE. LIVE UNITED

LETTER FROM THE CEO

OUR VISION: The Tri-County region is extraordinary! It is engaged, inclusive and thriving, and demands a high-quality educational system and economic conditions to eliminate the cycle of poverty, inspire graduation and foster lifelong good health. All residents achieve their highest potential. Individuals, organizations and institutions are aligned and commit their human and financial resources to ensure this quality of life.

OUR MISSION: Trident United Way is a catalyst for measurable community transformation through collective impact in education, financial stability and health.

TOGETHER WE ARE WORKING TO

Educational outcomes for all students. Every child will be supported from birth, to be prepared for school, meet grade-level standards and graduate from high school prepared for employment or higher education. The opportunity for all people to enjoy a quality standard of living. Our neighbors have an opportunity and the tools for personal advancement; from crisis, to financial stability, to self-sufficiency. The health of all individuals. Our neighbors will have access to healthcare, know how to lead healthy lives and be empowered to live and participate in environments that promote good health.

artners are the critical link for changing lives, building hope and creating a lasting impact for all who call this place home. Thank you for being part of our passionate team dedicated to improving lives now and for generations to come.

A LETTER FROM THE CEO Dear Friends, Trident United Way’s 74th year of serving our Tri-County region demonstrated the powerful results of a collective impact approach to social change. Your investment of time, talent and treasure enabled Trident United Way to coordinate local organizations and agencies, maximize resources and create the best possible outcomes for the most people. When you invest in TUW, you help develop transformational education, financial stability and health initiatives that make our community better right now. You also enact lasting, large-scale progress toward the most important issues facing our neighbors. Your commitment makes it possible for Trident United Way to do what we do best – augment our community’s corporate and individual strengths and assets by working collaboratively. Thank you for your ongoing support.

The Campaign Cabinet is a group of corporate and individual leaders within the Tri-County region who guide the strategy of Trident United Wayâ&#x20AC;&#x2122;s annual campaign. They are dedicated to attracting and engaging community members through their own unique networking opportunities.

Alexis de Tocqueville Society lexis de Tocqueville admired three elements in North American society: liberty, equality and the spirit of neighbor helping neighbor. Tocqueville believed that by achieving these elements of democracy, all people would choose to pursue freedom, knowledge and prosperity. Trident United Way’s Tocqueville Society was established in 1998 by a group of 12 philanthropists who believed they could make a difference for their Tri-County neighbors. Today, Tocqueville Society membership has grown to more than 200 participants who have invested over $20 million into programs that make a difference in the education, financial stability and health of our community. The influential and dedicated leaders of this philanthropic group trust Trident United Way to make smart investments that have measurable outcomes and bring agencies together to work on societal issues that no one organization can solve alone. Special orders of recognition have been created based on these concepts and distinguished by each member’s chosen level of giving. $1,000,000+ $100,000-$999,999

“I give to Trident United Way because I believe in the comprehensive approach of addressing education, financial stability and health. I am especially passionate about providing equitable educational opportunities to all children in our community, but without also confronting the lack of adequate healthcare and lack of financial stability many of our neighbors face, those educational opportunities are likely to remain unrealized. I strongly believe that we all have a responsibility to help improve our society in whatever way we can, and giving both time and money to Trident United Way is one way I try to fulfill that responsibility.“ -Sara DeWolf, TUW Board Member, Tocqueville Society Member

Tocqueville Society members get a sneak peek of the Zucker Family Sea Turtle Recovery at the South Carolina Aquarium during their spring event.

BETH A. AND CHRISTOPHER F. KERRIGAN

MR. AND MRS. WILLIAM B. KORB

rident United Way Palmetto Society is a network of leaders investing in the Tri-County region. With an annual gift of $1,000 or more, Palmetto Society members are committed to affecting bold community change in education, financial stability and health through giving, advocating and volunteering. Trident United Way recognizes three levels of leadership giving through the Palmetto Society. Each level allows members to increase their impact within our community. We applaud the accomplishments and efforts of this dynamic group of committed philanthropists. They are passionate about helping their community LIVE UNITED®.

“I give to Trident United Way knowing that my gift will be combined with thousands of others to have the greatest possible impact in our community. Being a member of the Palmetto Society gives me the opportunity to network and volunteer alongside local leaders who are also looking to drive measurable community change. Trident United Way has so many ways to get involved, and affinity groups are a great place to start.” –Reeves Skeen, First Citizens Bank 24 | TRIDENT UNITED WAY

Bruce A. and Sheila L. Mills

Mr. and Mrs. Leslie A. Cabiness

In memory of George W. Miller

Ms. Claudia A. Porter and

Henry J. and Sheryl A. Blackford

Dr. Kathryn A. and

In Memory of Alfred Brewer

Mr. and Mrs. Robert A. Dolson

Brett A. and Kimberly C. Corder

Robert J. and Angela A. Mussat

Peter L. and Gail B. Sibley

Mr. and Mrs. Joseph A. Tronco

Mr. and Mrs. Thomas A. Young

“Trident United Way plays a significant role in the most critical issues facing our community. When chairing the Trident United Way board, it was important that we didn’t focus on only what we could do today or this month, but to improve longterm outcomes the Tri-County. We are happy to be in a position to be able to invest in long-lasting change, and we know that with a legacy gift Trident United Way can really make a difference.” -Bill & Prudence Finn, Tocqueville Legacy Circle

HARD EARNED HOME For years, Vera* avoided filing taxes at all costs, certain she owed money she could never pay. Tax season loomed like a storm cloud as she worked multiple jobs just to cover bills and groceries. There was never much left over at the end of the month. She’s a mother, a grandmother and a hardworking woman of great faith. She worked full time while going to school and raising her grandchildren, and she dreamed of owning a home one day – a lofty goal for a minimum wage earner with a family depending on her. Last spring, Vera summoned the courage to dial a number she’d seen on a pamphlet advertising free financial wellness services with the SC Thrive – The Benefit Bank. She spoke with a counselor who encouraged her to come in for a conversation about taxes and the benefits for which she might be eligible. The counselor helped Vera file three years of taxes, completely free of charge. To her astonishment, she did not owe taxes – she earned a return! A few weeks later with her $12,000 refund in hand, Vera put down a deposit and became a first-time home owner. SC Thrive – The Benefit Bank is just one of Trident United Way’s tools for creating lasting change in our community. From 2010 to 2017, SC Thrive and its partner sites have brought over $437 million back to over 228,000 South Carolinians in the form of tax refunds and work supports. Many of those who qualified for refunds did not apply for them due to lack of knowledge or the ability to navigate the complex application procedures. *Name changed to protect privacy

AFFINITY GROUPS Trident United Way Affinity Groups are collaborations of donors with shared interests. They are committed to significantly improving the education, financial stability and health in our region through giving, volunteering and advocating in our community. Affinity groups offer exclusive experiences, such as networking events, with a focus on personal and professional development and volunteer activities that give members a hands-on connection to Trident United Wayâ&#x20AC;&#x2122;s work. For more information, contact Leadership Programs Manager Hallet Graham at hgraham@tuw.org or (843)740-7726.

WOMENCOMMITTEE UNITED MEMBERS WOMEN UNITED STEERING STEERING COMMITTEE Women United members contribute an annual individual or combined gift of $1,000 to Trident United Way. They believe in the collective power of women and know that by empowering one another, we can accomplish more for our community.

AFRICAN-AMERICAN LEADERSHIP SOCIETY STEERING COMMITTEE MEMBERS AALC comprises black and minority philanthropists who contribute an individual or combined gift of $1,000 or more to TUW. The collective impact model magnifies the power of their support in our community.

YOUNG PHILANTHROPISTS SOCIETY STEERING COMMITTEE MEMBERS YPS members are leaders age 40 and under who give an individual or combined annual gift of $1,000 or more. YP20 is a step-up program for emerging philanthropists age 29 years and under who contribute an annual gift of $500 or more to Trident United Way.

BENEFACTORS These leading corporations step beyond the bounds of traditional giving and contribute a single, comprehensive gift to support special events and activities.

READING BY THIRD A COLLECTIVE IMPACT PROJECT hroughout the Tri-County area, people look to Trident United Way to create lasting solutions to critical issues. Though it is universally acknowledged that students learn to read before third grade and read to learn from that point forward, research shows that only 48% of Tri-County third graders were reading at grade level in 2017. “Early literacy is a key factor in ensuring children can grow into a workforce that contributes to strong community and economic development,” Trident United Way VP of Community Impact, Amanda Lawrence, explains. “It’s important for TUW to invest in literacy initiatives where districts and teachers feel they need the most support. We’re so excited to reinforce the great work educators are already doing in the Tri-County area.” Trident United Way identified a dire need to better prepare our young people for success. 46 | TRIDENT UNITED WAY

Through comprehensive research, high-impact partnerships and your thoughtful investments, we launched the Tri-County Reading By Third Project in August 2017. The Reading By Third method is simple: it asks teachers to meet students at their individual levels, and to read with them one on one. It’s an evidence-based model developed by the University of Florida Lastinger Institute, and in just three quarters it proved wildly successful in each of the four Tri-County school districts. Trident United Way has committed up to $1.5 million to aid students and teachers from eight schools schools in four school districts over a three-year period. Focusing on pre-k through second grade teachers and learners, we anticipate that 1,100 students will be impacted during the inaugural year of the project. 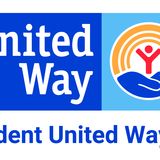