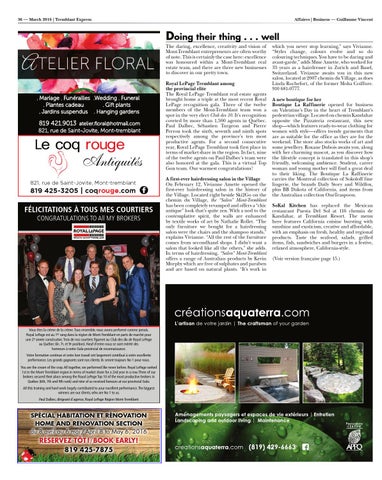 Doing their thing . . . well The daring, excellence, creativity and vision of Mont-Tremblant entrepreneurs are often worthy of note. This is certainly the case here: excellence was honoured within a Mont-Tremblant real estate team, and there are three new businesses to discover in our pretty town. Royal LePage Tremblant among the provincial elite The Royal LePage Tremblant real estate agents brought home a triple at the most recent Royal LePage recognition gala. Three of the twelve members of the Mont-Tremblant team won a spot in the very elect Club des 10. It’s recognition coveted by more than 1,500 agents in Québec. Paul Dalbec, Sébastien Turgeon and Pierre Perron took the sixth, seventh and ninth spots respectively among the province’s ten most productive agents. For a second consecutive year, Royal LePage Tremblant took first place in terms of market share in the region. In fact, nine of the twelve agents on Paul Dalbec’s team were also honored at the gala. This is a virtual Top Gun team. Our warmest congratulations!

FÉLICITATIONS À TOUS MES COURTIERS CONGRATULATIONS TO All MY BROKERS

A first-ever hairdressing salon in the Village On February 12, Vivianne Amette opened the first-ever hairdressing salon in the history of the Village. Located right beside Ski2Go on the chemin du Village, the “Salon” Mont-Tremblant has been completely revamped and offers a “chic antique” look that’s quite zen. With a nod to the contemplative spirit, the walls are enhanced by textile works of art by Nathalie Rollet. “The only furniture we bought for a hairdressing salon were the chairs and the shampoo stands,” explains Vivianne. “All the rest of the furniture comes from secondhand shops. I didn’t want a salon that looked like all the others,” she adds. In terms of hairdressing, “Salon” Mont-Tremblant offers a range of Australian products by Kevin Murphy which are free of sulphates and paraben and are based on natural plants. “It’s work in

which you never stop learning,” says Vivianne. “Styles change, colours evolve and so do colouring techniques. You have to be daring and avant-garde,” adds Mme Amette, who worked for 35 years as a hairdresser in Zurich and Basel, Switzerland. Vivianne awaits you in this new salon, located at 2007 chemin du Village, as does Linda Rochefort, of the former Moha Coiffure. 910 681-0777. A new boutique for her Boutique La Raffinerie opened for business on Valentine’s Day in the heart of Tremblant’s pedestrian village. Located on chemin Kandahar opposite the Pizzateria restaurant, this new shop—which features ready-to-wear clothing for women with style—offers trendy garments that are as suitable for the office as they are for the weekend. The store also stocks works of art and some jewellery. Roxane Dubois awaits you, along with her charming mascot, as you discover how the lifestyle concept is translated in this shop’s friendly, welcoming ambience. Student, career woman and young mother will find a great deal to their liking. The Boutique La Raffinerie carries the Montreal collection of Sokoloff fine lingerie, the brands Daily Story and Wildfox, plus BB Dakota of California, and items from the Australian collection OneTeaspoon. SoKal Kitchen has replaced the Mexican restaurant Puesta Del Sol at 116 chemin de Kandahar, at Tremblant Resort. The menu here features California cuisine bursting with sunshine and exoticism, creative and affordable, with an emphasis on fresh, healthy and regional products. Taste the seafood, salads, grilled items, fish, sandwiches and burgers in a festive, relaxed atmosphere, California-style. (Voir version française page 15.) 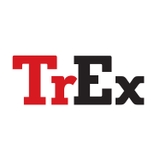