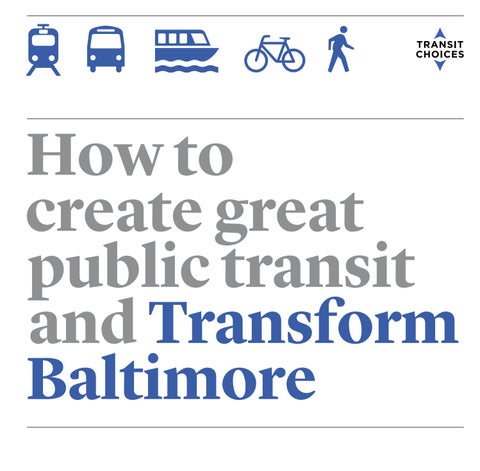 How to create great public transit and Transform Baltimore

According to a study released in April 2015 by Harvard University, the number one obstacle facing people trying to escape from poverty is neither crime nor poor education, but poor connections to job opportunities, schools, health care and even healthy food through public transportation.

As stated by the Opportunity Collaborative Report of the Baltimore Metropolitan Council, the average commute of citizens in East &amp; West Baltimore to any of the regions with living wage jobs available such as BWINursery Road, Hunt Valley, or the new Amazon warehouse is 90 minutes one way.

According to Baltimore Collegetown surveys over the last twelve years, students have said repeatedly that transportation (from bus and rail options to better bike lanes) is the number one thing lacking in the region. Students want more ways to get to social destinations, jobs/internships, shopping, and volunteer positions without having to navigate through neighborhoods they donâ&amp;#x20AC;&amp;#x2122;t know or pay for parking. Stronger transit networks would encourage students to stay here and grow our region.

The lack of a real transit system hampers our cityâ&amp;#x20AC;&amp;#x2122;s ability to attract and retain families and businesses. Our cityâ&amp;#x20AC;&amp;#x2122;s piecemeal transit directly contributes to patchwork economic development, intractable quality of life frustrations for residents in neighborhoods, and persistently segregated communities. While complex, these problems are fixable.

The development of a comprehensive, efficient and effective mass transit system is essential to Baltimoreâ&amp;#x20AC;&amp;#x2122;s long-term sustainability, prosperity and relevance. Running what we have optimally and efficiently is the first step towards better transit.

A transit system that provides choices and links people to jobs and opportunities, offers a higher quality of life, a better environment, a healthier lifestyle and supports the local and regional economy.

Our Principles These are the goals that should guide all decisions about transit in Baltimore. A transit system should beâ&amp;#x20AC;Ś

Broad in its geographical coverage, serving both the urban core and the larger metropolitan area â&amp;#x20AC;&amp;#x201D; linking all population and commercial centers in the five-county and Baltimore City region.

3 Integrated Totally integrated allowing convenient, safe, economical and seamless transfer from one mode to another and together forming a regional public transportation system.

4 Equitable and Sustainable Environmentally and fiscally sustainable, with transit hubs, building community and neighborhoods through economic and enterprise development.

A Transit Vision for the City

In the next four years this is what needs to be done to improve our transit system. All Modes

• Articulate a short, mid and long

term vision for transit in the city.

• Maintain a good state of repair

for all transit modes/stations &amp; high standards of cleanliness.

• Make sure real time data exists for all modes.

• Establish and carry out a

MTA through measures such as the oversight board suggested in HB 546-2016.

• Work with MTA to develop a

single smart card for all transit modes with broad accessibility.

Every first-class city in the world has a first-class rail system as part of its public transit system. Four-Year Plan

to North Avenue and possibly beyond along Green Line corridor.

• Explore all options for the Red Line corridor.

• Explore the re-introduction of

along light rail, especially from Mount Royal to Camden Yards.

• Make best use of all existing rail

assets by aggressively fostering TOD around all regional rail stations.

streetcars, in particular along North Avenue.

People take over 270,000 rides a day on buses and the circulator in Baltimore. Four-Year Plan

• Determine role and function of

• Work with MTA on

free circulator within overall bus system and develop sustainable funding sources for it. BaltimoreLink proposal to make certain it will be a substantive improvement over the present system.

systems and explore shuttles as part of an overall transit system.

• Water Taxi needs to be

Branch serving Cherry Hill, Port Covington and Westport. commuters and tourists with one system and separate pricing for different clientele.

a year-round, all-weather system. funding model which will allow these improvements to happen.

Biking is an essential part of any transit system. It reduces traffic, is non-polluting and quiet, while providing health benefits to cyclists. Four-Year Plan

• Invest in and expand bike share beyond 50 stations and 500 bikes.

parking along city streets downtown, in all commercial districts, and at major institutions and destinations.

An average of 946 pedestrians were struck by cars each year in Baltimore from 2011-2015. MDOT&#39;s Highway Safety Office

streetscaping for all of North Avenue and Charles Street.

• Install pedestrian amenities at all transit stops above a certain ridership.

outs, or pedestrian refuges at all intersections above specific pedestrian accident occurrence rate.

In order to thrive, we know Baltimore City and the State of Maryland must invest in a 21st-century public transit system for Baltimore and the region. Let’s make it happen!