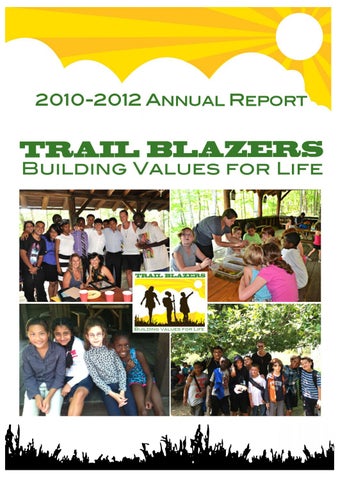 Introduction Vision Youth and young adults who are productive, responsible compassionate citizens in their communities.

Mission To facilitate the development of values and life skills essential for productive citizenship in youth through outdoor experiential education.

Guiding Principles Our programs are designed to fulfill four guiding principles. Through participation in our program, youth develop: 1. A love of learning for learningâ&#x20AC;&#x2122;s sake, reading and writing more. 2. A greater passion for the natural world and expand their knowledge of how to care for it and its inhabitants. 3. Improved health and body stewardship, eating healthier and maintaining a healthy self image. 4. Social and emotional competencies including self-confidence, teamwork, communication, empathy, conflict resolution and appropriate interaction with peers and adults. 2

Introduction Programs Trail Blazers’ holistic, award-winning programming emphasizes emotional, social, intellectual, and physical participation: Summer Outdoor Experiential Education Program – Sleepaway On our forested 1,100-acres, youth live for 14 or 28 days in a “smallcamp,” a family-like group of up to nine children where they schedule their own program in collaboration with their two to three Group Leaders. This structure, known as decentralized camping, is Trail Blazers’ unique approach.

Under One Sky Leadership Program Lessons learned at camp are translated into actions as empowered adolescents learn ways to be environmental stewards in urban settings. Youth start at sleepaway camp and continue via workshops through the academic year.

Counselors in Training Leadership Program Teen-aged campers interested in working with children develop the leadership skills, communication skills and competency required to succeed in this field by assisting Group Leaders in the Day and Sleepaway Summer Outdoor Experiential Education Programs.

The Youth We Serve Our programs serve youth from all backgrounds: • 81% are eligible for free or reduced lunch • 79% are from NYC, 21% from New Jersey • 44% are African American, 30% Latino, 17% White, 6% Asian • Youth come to Trail Blazers from word of mouth as well as relationships with schools and social service agencies such as Eva’s Village, Harlem Dowling-West Side Center for Children and Family Services, and Federation of Protestant Welfare Agencies, among others. 3

From the Board Trail Blazers enjoyed many successes in 2011-2012. As always, they are due to the hard work and commitment of many people – our Board, our staff, our long-time supporters and our new friends. Their extraordinary generosity of spirit, effort and support makes it possible to continue “Building Values for Life” and helping our campers become more productive, caring and responsible members of their families and communities.

We celebrated our 125th Anniversary this year with a very successful and energizing Gala. We are gratified to reach this rare milestone. Trail Blazers is the second oldest American Camping Association accredited camp in continuous operation in the United States. This attests to the enduring resonance of our mission and the quality of a unique program that changes young lives in remarkable ways year after year after year.

In 2012, we served 375 children in our summer residential camp and 45 more children in the third year of our day camp. The total represents the most children we have served in a single year. Continuity was again provided by winter and year-round programming, and by our commitment to accepting returning campers for at least three years. Our new Under One Sky leadership program was a great success. We established new partnerships with Children of Promise in Brooklyn and the I Have A Dream Foundation of Newark. Twenty children aging out of foster care in New Jersey learned practical job search skills in a new Intensive Life Skills program while being full-time campers.

Our Board has been enhanced substantially by the addition of several new Board members in 2011 and 2012. Their time, effort and talent have served us extremely well.

We look forward to continued growth and success in 2012-2013. Arthur Fishelman, Co-Chair

From 1887 to Today In 1887, John Ames Mitchell, original editor of Life magazine, raised $800 to send 266 underprivileged youth from New York City to the Life Fresh Air Farm in Branchville, CT. In 1939, the nation's second oldest American Camping Association accredited camp moved to a forested 1,100 acre site in Montague, NJ. Today, at 125 years old, Trail Blazer Camps is a nationally distinguished model for summer experiential programming as demonstrated by our 2006 Johns Hopkins Center for Summer Learning’s “Excellence in Summer Learning Award.” In 2012, there are still songs around the campfire instead of iPods, a chef preparing freshly cooked meals instead of heating up frozen pizzas, and canvas shelters and outdoor latrines instead of cabins. At Trail Blazers, we go back to basics. Non-competitive activities enrich our campers: learning about mushrooms while on daily hikes and practicing math and problem-solving by calculating water used during showers. More importantly, we foster the development of 21st century skills such as collaboration, communication, and confidence. This supportive setting benefits all, especially those who have not succeeded in traditional school environments. The highlight of every Trail Blazers’ experience is the Vagabond, the multi-day hiking adventure down the Appalachian Trail or via canoe down the Delaware River. This bonding experience tests survival skills learned during the session and its completion is an accomplishment campers are proud of for years afterwards. 5

Summer 2012 This summer, a record number of youth opened their eyes to the wonderment of nature and built lifelong memories at Trail Blazer Camps. 36 of these campers came through a new partnership with Children of Promise, an organization that serves children of incarcerated parents. 37 youth learned of Trail Blazers through a new contract with the State of New Jersey Office of Adolescent Services called Summer Intensive Life Skills Camp (SILC). This new initiative, awarded to only two camps in all of New Jersey, provides youth aging out of the foster care system with an opportunity to learn valuable life skills in an outdoor setting. In other words, to do what we have been doing for over a century! Our selection is a true testament to the excellence of our program. Also, for the third year, we welcomed local families in Montague, Port Jervis and surrounding areas at Trail Blazers Day Camp. Campers spent mornings and afternoons participating in the same outdoor, adventure-based and educational programming for which we are known: hiking, building birdhouses with Home Depot, and learning to recycle juice boxes into wallets with Montague Townshipâ&#x20AC;&#x2122;s Clean Communities Program, for example. They even made it into the local newspaper! Though many traditions remain the same: powwows, three bites, the vegetable garden, and Vagabond, we have updated some program elements to help todayâ&#x20AC;&#x2122;s youth explore nature in new ways: Bakers Acres has always been known as the canoeing group. We now also have a cycling group, complete with a cycling Vagabond! 6

125th Anniversary On June 19, 2012, guests gathered at the Manhattan Penthouse and joined us in ushering in more years of serving youth with a cocktail reception, auction and seated dinner. All proceeds from this event went towards our Life's Campership Fund, named in honor of our founder John Ames Mitchell, which provides scholarships that enables families to give their children essential summer programming. Honorees Dr. Barbara Brummer and Eric Olsen of The Nature Conservancy in New Jersey received the Mashipacong Award for their work in environmental preservation and stewardship – named for the Lake in which campers learn to swim, fish, and canoe. Our second honoree, Michele Friedman, Executive Director of SCOPE (Summer Camp Opportunities Promote Education), received the Lois Goodrich Award for her work in facilitating affordable camp programs for youth in need – named for Trail Blazers’ Director Lois Goodrich. As this was also a milestone in American Camp Association history, CEO Peg L. Smith sent congratulations via video.

Our Results Trail Blazers’ mission is “Building Values for Life.” At the end of the summer, campers evaluate their experience at camp and, year after year, we find:

Over 80% of children confirmed the Trail Blazers experience helped them

Testimonials Excerpt from a parent letter: I just wanted to send you a big thank you! My children came home so different, not just physically but also intellectually and emotionally... [She] found an inner strength about her, she is speaking up and making sure she is being heard. Never ever did this happen before! [He] is much more in tune with others around him, controls his impulses and is not afraid of trying new foods. I am so proud of my children and the growth they are showing and I am sure they will continue to develop as they begin to process their adventure.

Excerpt from an alumnus staff: …It was this thread through my 20's and into my 30's, the foundation for my professional life. I think the word that came up…a lot was confidence. With that confidence came leadership skills, communication skills, and relationship skills. The ability to develop those skills was directly influenced by the people that surrounded me each year I returned… A mind once stretched by a new experience can never return to its original form. I don't know who said that, but that was my experience each time I returned to TBC.

Our Results One strength of which Trail Blazers is particularly proud is our life-long impact on values. In 2012, we sent out a survey to program alumni, some of whom were campers as far back as the 1940â&#x20AC;&#x2122;s. Below are some highlights of the survey results.

Say Trail Blazers influenced their curiosity and interest in learning

87Â˘ of each $1 raised supports essential programming. Our strict fiscal monitoring and a shared resources arrangement with our partners enables us to maintain our nonprofit industry low of only 13% of total budget spent on overhead costs.

Supporters It is the generousity of those who have faith in our programs and continue to support us that allows Trail Blazers to continue our work. Welfare Agencies Lorraine Greene Lee $25,000+ Memorial Foundation ACA-SCOPE Mertz Gilmore Anonymous Foundation City of Paterson, NJ The Niki and Joe Gregory Department of Children Charitable Foundation and Families, NJ Anna Krassy Harriet Ford Dickenson Anne Jones Foundation Anton Finelli

Board of Trustees and Staff 2012 Co-Chairmen 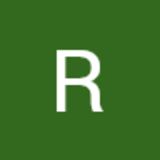