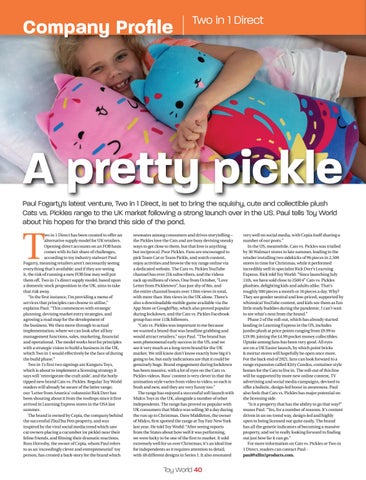 A pretty pickle Paul Fogarty’s latest venture, Two in 1 Direct, is set to bring the squishy, cute and collectible plush Cats vs. Pickles range to the UK market following a strong launch over in the US. Paul tells Toy World about his hopes for the brand this side of the pond.

wo in 1 Direct has been created to offer an alternative supply model for UK retailers. Opening direct accounts on an FOB basis comes with its fair share of challenges, according to toy industry stalwart Paul Fogarty, meaning retailers aren’t necessarily seeing everything that’s available; and if they are seeing it, the risk of running a new FOB line may well put them off. Two in 1’s direct supply model, based upon a domestic stock proposition in the UK, aims to take that risk away. “In the first instance, I’m providing a menu of services that principles can choose to utilise,” explains Paul. “This commences with strategic planning, devising market entry strategies, and agreeing a road map for the development of the business. We then move through to actual implementation, where we can look after all key management functions, sales, marketing, financial and operational. The model works best for principles with a strategic vision to build a business in the UK, which Two in 1 would effectively be the face of during the build phase.” Two in 1’s first two signings are Kangaru Toys, which is about to implement a licensing strategy it says will ‘reinvigorate the craft aisle’, and the hotlytipped new brand Cats vs. Pickles. Regular Toy World readers will already be aware of the latter range; our ‘Letter from America’ columnist Rick Derr has been shouting about it from the rooftops since it first arrived in Learning Express stores in the USA last summer. The brand is owned by Cepia, the company behind the successful ZhuZhu Pets property, and was inspired by the viral social media trend which saw cat owners placing a cucumber (or pickle) near their feline friends, and filming their dramatic reactions. Russ Hornsby, the owner of Cepia, whom Paul refers to as an ‘exceedingly clever and entrepreneurial’ toy person, has created a back-story for the brand which

resonates among consumers and drives storytelling – the Pickles love the Cats and are busy devising sneaky ways to get close to them, but that love is anything but reciprocal. Poor Pickles. Fans are encouraged to pick Team Cat or Team Pickle, and watch content, enjoy activities and browse the toy range online via a dedicated website. The Cats vs. Pickles YouTube channel has over 21k subscribers, and the videos rack up millions of views. One from October, &quot;Love Letter from Pickletown&quot;, has just shy of 8m, and the entire channel boasts over 110m views in total, with more than 16m views in the UK alone. There’s also a downloadable mobile game available via the App Store or GooglePlay, which also proved popular during lockdown, and the Cats vs. Pickles Facebook group has over 113k followers. “Cats vs. Pickles was important to me because we wanted a brand that was headline grabbing and would attract retailers,” says Paul. “The brand has seen phenomenal early success in the US, and we see it very much as a long-term brand for the UK market. We still know don’t know exactly how big it’s going to be, but early indications are that it could be genuinely huge. Brand engagement during lockdown has been massive, with a lot of eyes on the Cats vs. Pickles videos. Russ’ content is very clever in that the animation style varies from video to video, so each is fresh and new, and they are very funny too.” The range has enjoyed a successful soft launch with Midco Toys in the UK, alongside a number of other independents. The range has proved so popular with UK consumers that Midco was selling 50 a day during the run up to Christmas. Dave Middleton, the owner of Midco, first spotted the range at Toy Fair New York last year. He told Toy World: “After seeing reports from the States about how well it was performing, we were lucky to be one of the first to market. It sold extremely well for us over Christmas; it’s an ideal line for independents as it requires attention to detail, with 48 different designs in Series 1. It also resonated

very well on social media, with Cepia itself sharing a number of our posts.” In the US, meanwhile, Cats vs. Pickles was trialled by 30 Walmart stores in late summer, leading to the retailer installing two sidekicks of 96 pieces in 2,500 stores in time for Christmas, while it performed incredibly well in specialist Rick Derr’s Learning Express. Rick told Toy World: &quot;Since launching July 11th, we have sold close to 2500 4&quot; Cats vs. Pickles plushies, delighting kids and adults alike. That&#39;s roughly 500 pieces a month or 16 pieces a day. Why? They are gender neutral and low-priced, supported by whimsical YouTube content, and kids see them as fun little study buddies during the pandemic. I can&#39;t wait to see what&#39;s next from the brand.&quot; Phase 2 of the roll-out, which has already started landing in Learning Express in the US, includes jumbo plush at price points ranging from £9.99 to £19.99, joining the £4.99 pocket money collectibles. Uptake among fans has been very good. All eyes are on a UK Easter launch, by which point bricks &amp; mortar stores will hopefully be open once more. For the back end of 2021, fans can look forward to a range expansion called Kitty Condos, container-style homes for the Cats to live in. The roll-out of this line will be supported by more new online content, TV advertising and social media campaigns, devised to offer a holistic, design-led boost in awareness. Paul also feels that Cats vs. Pickles has major potential on the licensing side. “Is it a property that has the ability to go that way?” muses Paul. “Yes, for a number of reasons. It’s content driven in an on-trend way, design-led and highly open to being licensed out quite easily. The brand has all the genetic indicators of becoming a massive property, and we’re really looking forward to finding out just how far it can go.” For more information on Cats vs. Pickles or Two in 1 Direct, readers can contact Paul paul@allin1products.com.