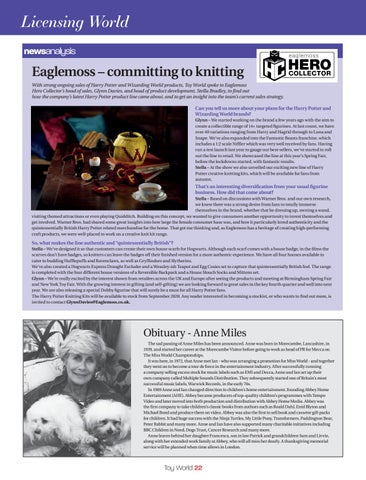 Eaglemoss – committing to knitting With strong ongoing sales of Harry Potter and Wizarding World products, Toy World spoke to Eaglemoss Hero Collector’s head of sales, Glynn Davies, and head of product development, Stella Bradley, to find out how the company’s latest Harry Potter product line came about, and to get an insight into the team’s current sales strategy. Can you tell us more about your plans for the Harry Potter and Wizarding World brands? Glynn – We started working on the brand a few years ago with the aim to create a collectible range of 14+ targeted figurines. At last count, we have over 40 variations ranging from Harry and Hagrid through to Luna and Snape. We’ve also expanded into the Fantastic Beasts franchise, which includes a 1:2 scale Niffler which was very well received by fans. Having run a test launch last year to gauge our best-sellers, we’ve started to roll out the line to retail. We showcased the line at this year’s Spring Fair, before the lockdowns started, with fantastic results. Stella – At the show we also unveiled our exciting new line of Harry Potter creative knitting kits, which will be available for fans from autumn.

That’s an interesting diversification from your usual figurine business. How did that come about? Stella – Based on discussions with Warner Bros. and our own research, we knew there was a strong desire from fans to totally immerse themselves in the brand, whether that be dressing up, owning a wand, visiting themed attractions or even playing Quidditch. Building on this concept, we wanted to give consumers another opportunity to invest themselves and get involved. Warner Bros. had shared some great insights into how large the female consumer base was, and how it particularly loved authenticity and the quintessentially British Harry Potter related merchandise for the home. That got me thinking and, as Eaglemoss has a heritage of creating high-performing craft products, we were well-placed to work on a creative knit kit range.

So, what makes the line authentic and “quintessentially British”? Stella – We’ve designed it so that customers can create their own house scarfs for Hogwarts. Although each scarf comes with a house badge, in the films the scarves don’t have badges, so knitters can leave the badges off their finished version for a more authentic experience. We have all four houses available to cater to budding Hufflepuffs and Ravenclaws, as well as Gryffindors and Slytherins. We’ve also created a Hogwarts Express Draught Excluder and a Weasley-ish Teapot and Egg Cosies set to capture that quintessentially British feel. The range is completed with the four different house versions of a Reversible Backpack and a House Slouch Socks and Mittens set. Glynn – We’re really excited by the interest shown from retailers across the UK and Europe after seeing the products and meeting at Birmingham Spring Fair and New York Toy Fair. With the growing interest in gifting (and self-gifting) we are looking forward to great sales in the key fourth quarter and well into next year. We are also releasing a special Dobby figurine that will surely be a must for all Harry Potter fans. The Harry Potter Knitting Kits will be available to stock from September 2020. Any reader interested in becoming a stockist, or who wants to find out more, is invited to contact GlynnDavies@Eaglemoss.co.uk.

Obituary - Anne Miles The sad passing of Anne Miles has been announced. Anne was born in Morecambe, Lancashire, in 1939, and started her career at the Morecambe Visitor before going to work as head of PR for Mecca on The Miss World Championships. It was here, in 1972, that Anne met Ian - who was arranging a promotion for Miss World - and together they went on to become a tour de force in the entertainment industry. After successfully running a company selling excess stock for music labels such as EMI and Decca, Anne and Ian set up their own company called Multiple Sounds Distribution. They subsequently started one of Britain’s most successful music labels, Warwick Records, in the early 70s. In 1989 Anne and Ian changed direction to children&#39;s home entertainment, founding Abbey Home Entertainment (AHE). Abbey became producers of top-quality children’s programmes with Tempo Video and later moved into both production and distribution with Abbey Home Media. Abbey was the first company to take children’s classic books from authors such as Roald Dahl, Enid Blyton and Michael Bond and produce them on video. Abbey was also the first to sell book and cassette gift packs for children. It had huge success with the Ninja Turtles, My Little Pony, Transformers, Paddington Bear, Peter Rabbit and many more. Anne and Ian have also supported many charitable initiatives including BBC Children in Need, Dogs Trust, Cancer Research and many more. Anne leaves behind her daughter Francesca, son in law Patrick and grandchildren Sam and Livvie, along with her extended work family at Abbey, who will all miss her dearly. A thanksgiving memorial service will be planned when time allows in London.