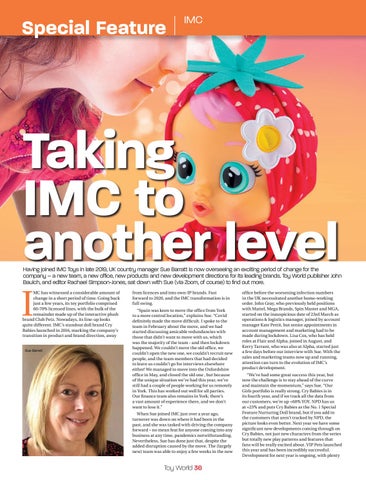 Taking IMC to another level

Having joined IMC Toys in late 2019, UK country manager Sue Barratt is now overseeing an exciting period of change for the company – a new team, a new office, new products and new development directions for its leading brands. Toy World publisher John Baulch, and editor Rachael Simpson-Jones, sat down with Sue (via Zoom, of course) to find out more.

MC has witnessed a considerable amount of change in a short period of time. Going back just a few years, its toy portfolio comprised 60-70% licensed lines, with the bulk of the remainder made up of the interactive plush brand Club Petz. Nowadays, its line-up looks quite different. IMC’s standout doll brand Cry Babies launched in 2016, marking the company’s transition in product and brand direction, away

from licences and into own-IP brands. Fast forward to 2020, and the IMC transformation is in full swing. “Spain was keen to move the office from York to a more central location,” explains Sue. “Covid definitely made the move difficult. I spoke to the team in February about the move, and we had started discussing amicable redundancies with those that didn’t want to move with us, which was the majority of the team - and then lockdown happened. We couldn’t move the old office, we couldn’t open the new one, we couldn’t recruit new people, and the team members that had decided to leave us couldn’t go for interviews elsewhere either! We managed to move into the Oxfordshire office in May, and closed the old one , but because of the unique situation we’ve had this year, we’ve still had a couple of people working for us remotely in York. This has worked out well for all parties. Our finance team also remains in York; there’s a vast amount of experience there, and we don’t want to lose it.” When Sue joined IMC just over a year ago, turnover was down on where it had been in the past, and she was tasked with driving the company forward – no mean feat for anyone coming into any business at any time, pandemics notwithstanding. Nevertheless, Sue has done just that, despite the added disruption caused by the move. The (largely new) team was able to enjoy a few weeks in the new

office before the worsening infection numbers in the UK necessitated another home-working order. John Gray, who previously held positions with Mattel, Mega Brands, Spin Master and MGA, started on the inauspicious date of 23rd March as operations &amp; logistics manager, joined by account manager Kate Pettit, but senior appointments in account management and marketing had to be made during lockdown. Lisa Cox, who has held roles at Flair and Alpha, joined in August, and Kerry Tarrant, who was also at Alpha, started just a few days before our interview with Sue. With the sales and marketing teams now up and running, attention can turn to the evolution of IMC’s product development. “We’ve had some great success this year, but now the challenge is to stay ahead of the curve and maintain the momentum,” says Sue. “Our Girls portfolio is really strong. Cry Babies is in its fourth year, and if we track all the data from our customers, we’re up +60% YOY. NPD has us at +23% and puts Cry Babies as the No. 1 Special Feature Nurturing Doll brand, but if you add in the customers that aren’t tracked by NPD, the picture looks even better. Next year we have some significant new developments coming through on Cry Babies, not just new characters from the series but totally new play patterns and features that fans will be really excited about. VIP Pets launched this year and has been incredibly successful. Development for next year is ongoing, with plenty