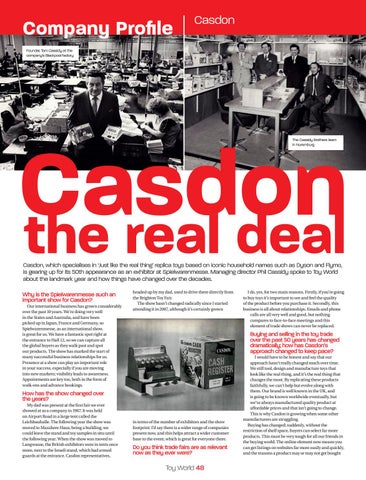 Casdon the real deal The Cassidy Brothers team in Nuremburg

Casdon, which specialises in ‘Just like the real thing’ replica toys based on iconic household names such as Dyson and Flymo, is gearing up for its 50th appearance as an exhibitor at Spielwarenmesse. Managing director Phil Cassidy spoke to Toy World about the landmark year and how things have changed over the decades.

Why is the Spielwarenmesse such an important show for Casdon? Our international business has grown considerably over the past 10 years. We’re doing very well in the States and Australia, and have been picked up in Japan, France and Germany, so Spielwarenmesse, as an international show, is great for us. We have a fantastic spot right at the entrance to Hall 12, so we can capture all the global buyers as they walk past and spot our products. The show has marked the start of many successful business relationships for us. Presence at a show can play an important role in your success, especially if you are moving into new markets; visibility leads to awareness. Appointments are key too, both in the form of walk-ons and advance bookings.

headed up by my dad, used to drive there directly from the Brighton Toy Fair. The show hasn’t changed radically since I started attending it in 2007, although it’s certainly grown

Buying and selling in the toy trade over the past 50 years has changed dramatically; how has Casdon’s approach changed to keep pace?

How has the show changed over the years? My dad was present at the first fair we ever showed at as a company in 1967. It was held on Airport Road in a large tent called the Leichbauhalle. The following year the show was moved to Maxshere Haus; being a building, we could leave the stand and toy samples in situ until the following year. When the show was moved to Langwasse, the British exhibitors were in tents once more, next to the Israeli stand, which had armed guards at the entrance. Casdon representatives,

I do, yes, for two main reasons. Firstly, if you’re going to buy toys it’s important to see and feel the quality of the product before you purchase it. Secondly, this business is all about relationships. Emails and phone calls are all very well and good, but nothing compares to face-to-face meetings and this element of trade shows can never be replaced.

in terms of the number of exhibitors and the show footprint. I’d say there is a wider range of companies present now, and this helps attract a wider customer base to the event, which is great for everyone there.

Do you think trade fairs are as relevant now as they ever were?

I would have to be honest and say that our approach hasn’t really changed much over time. We still tool, design and manufacture toys that look like the real thing, and it’s the real thing that changes the most. By replicating these products faithfully, we can’t help but evolve along with them. Our brand is well known in the UK, and is going to be known worldwide eventually, but we’ve always manufactured quality product at affordable prices and that isn’t going to change. This is why Casdon is growing when some other manufacturers are struggling. Buying has changed; suddenly, without the restriction of shelf space, buyers can select far more products. This must be very tough for all our friends in the buying world. The online element now means you can get listings on websites far more easily and quickly, and the reasons a product may or may not get bought