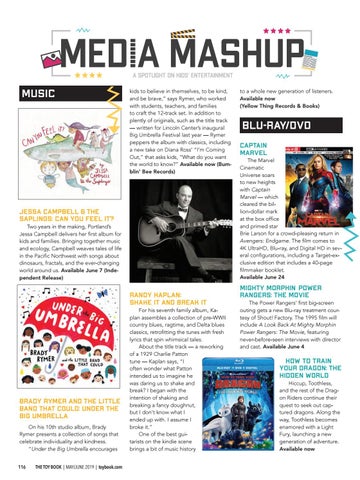 kids to believe in themselves, to be kind, and be brave,” says Rymer, who worked with students, teachers, and families to craft the 12-track set. In addition to plently of originals, such as the title track — written for Lincoln Center’s inaugural Big Umbrella Festival last year — Rymer peppers the album with classics, including a new take on Diana Ross’ “I’m Coming Out,” that asks kids, “What do you want the world to know?” Available now (Bumblin&#39; Bee Records)

JESSA CAMPBELL &amp; THE SAPLINGS: CAN YOU FEEL IT? Two years in the making, Portland’s Jessa Campbell delivers her ﬁrst album for kids and families. Bringing together music and ecology, Campbell weaves tales of life in the Paciﬁc Northwest with songs about dinosaurs, fractals, and the ever-changing world around us. Available June 7 (Independent Release)

RANDY KAPLAN: SHAKE IT AND BREAK IT

BRADY RYMER AND THE LITTLE BAND THAT COULD: UNDER THE BIG UMBRELLA On his 10th studio album, Brady Rymer presents a collection of songs that celebrate individuality and kindness. “Under the Big Umbrella encourages 116

For his seventh family album, Kaplan assembles a collection of pre-WWII country blues, ragtime, and Delta blues classics, retroﬁtting the tunes with fresh lyrics that spin whimsical tales. About the title track — a reworking of a 1929 Charlie Patton tune — Kaplan says, “I often wonder what Patton intended us to imagine he was daring us to shake and break? I began with the intention of shaking and breaking a fancy doughnut, but I don&#39;t know what I ended up with. I assume I broke it.” One of the best guitarists on the kindie scene brings a bit of music history

blu-ray/dvd CAPTAIN MARVEL The Marvel Cinematic Universe soars to new heights with Captain Marvel — which cleared the billion-dollar mark at the box ofﬁce and primed star Brie Larson for a crowd-pleasing return in Avengers: Endgame. The ﬁlm comes to 4K UltraHD, Blu-ray, and Digital HD in several conﬁgurations, including a Target-exclusive edition that includes a 40-page ﬁlmmaker booklet. Available June 24

MIGHTY MORPHIN POWER RANGERS: THE MOVIE The Power Rangers’ ﬁrst big-screen outing gets a new Blu-ray treatment courtesy of Shout! Factory. The 1995 ﬁlm will include A Look Back At Mighty Morphin Power Rangers: The Movie, featuring never-before-seen interviews with director and cast. Available June 4

HOW TO TRAIN YOUR DRAGON: THE HIDDEN WORLD Hiccup, Toothless, and the rest of the Dragon Riders continue their quest to seek out captured dragons. Along the way, Toothless becomes enamored with a Light Fury, launching a new generation of adventure. Available now 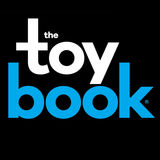