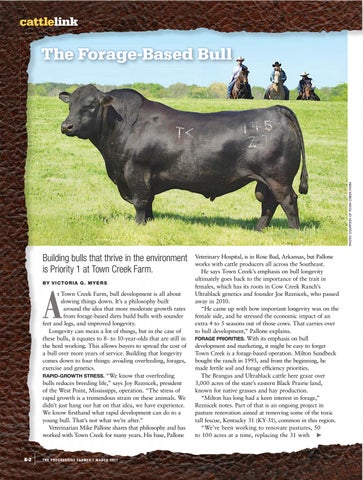 Building bulls that thrive in the environment is Priority 1 at Town Creek Farm. BY V I C TO R I A G . M Y E R S

t Town Creek Farm, bull development is all about slowing things down. It’s a philosophy built around the idea that more moderate growth rates from forage-based diets build bulls with sounder feet and legs, and improved longevity. Longevity can mean a lot of things, but in the case of these bulls, it equates to 8- to 10-year-olds that are still in the herd working. This allows buyers to spread the cost of a bull over more years of service. Building that longevity comes down to four things: avoiding overfeeding, forages, exercise and genetics. RAPID-GROWTH STRESS. “We know that overfeeding bulls reduces breeding life,” says Joy Reznicek, president of the West Point, Mississippi, operation. “The stress of rapid growth is a tremendous strain on these animals. We didn’t just hang our hat on that idea, we have experience. We know firsthand what rapid development can do to a young bull. That’s not what we’re after.” Veterinarian Mike Pallone shares that philosophy and has worked with Town Creek for many years. His base, Pallone

Veterinary Hospital, is in Rose Bud, Arkansas, but Pallone works with cattle producers all across the Southeast. He says Town Creek’s emphasis on bull longevity ultimately goes back to the importance of the trait in females, which has its roots in Cow Creek Ranch’s Ultrablack genetics and founder Joe Reznicek, who passed away in 2010. “He came up with how important longevity was on the female side, and he stressed the economic impact of an extra 4 to 5 seasons out of those cows. That carries over to bull development,” Pallone explains. FORAGE PRIORITIES. With its emphasis on bull development and marketing, it might be easy to forget Town Creek is a forage-based operation. Milton Sundbeck bought the ranch in 1993, and from the beginning, he made fertile soil and forage efficiency priorities. The Brangus and Ultrablack cattle here graze over 3,000 acres of the state’s eastern Black Prairie land, known for native grasses and hay production. “Milton has long had a keen interest in forage,” Reznicek notes. Part of that is an ongoing project in pasture renovation aimed at removing some of the toxic tall fescue, Kentucky 31 (KY-31), common in this region. “We’ve been working to renovate pastures, 50 to 100 acres at a time, replacing the 31 with ▶

cattlelink second-generation MaxQ Texoma tall fescue from Pennington,” Reznicek says. The endophyte in Texoma MaxQ II is nontoxic, and the variety is adaptable through the traditional fescue belt. It’s also considered as persistent as KY-31. Developed through a partnership among The Samuel Roberts Noble Foundation, Pennington Seed and New Zealand’s AgResearch, the novel endophyte grass came from a population of tall fescue that persisted for 30 years at the Foundation’s research farm. Reznicek adds they don’t intend to completely do away with KY-31. “Where we have the older fescue, we knock back seed heads and rotate bulls every 60 days to limit their exposure,” she says. “We don’t want to completely eliminate it from their diets, because many of these bulls go to customers who have Kentucky 31. The early exposure here helps them acclimate more easily.” RATION PROGRAM. Clint Ladner manages bull development for the operation. He says bulls are raised on 40- to 50-acre tracts. They are given a limited high-roughage ration of Sumrall 007 Bermuda haylage (40%), wet brewers grain (40-43%) and a mix of soy hull pellets, cracked corn, protein pellets and mineral. That ration, milled at the farm, is fed twice a day. The haylage is grown, harvested and ensiled on the ranch. Once bulls reach 1 year of age, corn is removed from the ration. Water and feed are at opposite ends of traps, encouraging daily exercise for feet and leg soundness. Ladner says what makes their development program unique is their focus on forages and that slower rate of growth. They weigh bulls every 30 to 45 days during development and adjust rations accordingly. “We want yearlings to be gaining 1.5 pounds a day,” Ladner says of the fall-born bulls. “On the spring-born bulls, we are looking for 2 pounds a day. We want them

Joy Reznicek (left) and Clint in fit, rock-solid Ladner say they emphasize bull condition. These are longevity and sound feet and very heat-tolerant legs—all characteristics enhanced bulls, and we don’t by forage-based diets during want them to break development. PHOTO: VICTORIA G. MYERS that grazing habit, so we make sure they leave the feed trough a little hungry.” SLOW DEVELOPMENT. Veterinarian Pallone says some heavier-muscled cattle breeds may gain twice as much as these Town Creek bulls, but there can be a downside to that. “Those larger bulls will look great, but it’s how they hold up that’s important,” he notes. “What happens when they get away from the feeder and have to work on grass with limited supplement? Slow development on a forage-based diet is just going to give you a bull with more longevity.” Ladner adds: “It’s almost impossible to get a yearling bull developed to a ready breeding condition without feeding him a high-energy diet. We believe cattle are made to eat grass.” ▶

Carrying on the Ultrablack Legacy Town Creek Farm’s herd is young by some industry standards, with its genetic roots firmly tied to nearby Cow Creek Ranch, Aliceville, Alabama. This is where Joe Reznicek’s Ultrablack line was developed. Reznicek was producing a blend of Brangus and Angus back in 1993, which he began to actively market in 1996 as the Ultrablack. In 2005, Cow Creek sold the Ultrablack trademark to the International Brangus Breeders Association. It’s a powerful legacy to Joe, who passed away in 2010. Milton Sundbeck, Town Creek Ranch owner, invested in Reznicek’s Ultrablack genetics in 2005. He was initially developing and selling bulls in partnership with Joe. In 2010, Sundbeck committed to expand his own 200-head cow herd and develop a bull market. Today, the herd is at 450 head, thanks to an intense fertility program focused on culling any unproductive females. His goal is a climate-proficient bull that

can be developed on a forage-based ration with hay, native grasses and winter fescue. President of Town Creek, Joy Reznicek, says their commitment begins at the culling gate. Anything that doesn’t bring a calf to the weaning pen is culled. That’s based on one round of artificial insemination (AI) for everything from heifers to the oldest cow. Conception rates on that one AI range from 55 to 60%. Females are bred first on standing heat then on timed synchronization. “After that timed date, we wait eight days, then a bull goes out,” Reznicek says. “Sixty days from the day we first AIed her, we pull the bull. So we are looking at a 60-day breeding season.” Fertility, maternal traits, disposition, forage efficiency and feet and udder soundness have been mainstays of the breeding program.

Reznicek says at weaning, they test for Johne’s on all dams, culling both dam and calf if a test comes back positive. They do both fecal and blood tests. “We are really emphasizing this,” she says. “It’s [Johne’s] in a lot of herds in the U.S., and it’s not something we yet have a good affordable test for. We believe if a cow is positive, her calf may well also be positive. We don’t want to sell someone a bull calf that, a couple of years down the road, starts to waste away and has to be sold. It’s a form of quality assurance for our buyers.” TESTING ISSUES. Brett notes there is no perfect test for Johne’s. Animals are exposed as calves, usually fecal to oral, but the organism that causes Johne’s (M. paratuberculosis) can also be transmitted in milk and transplacentally. Brett says based on his work, he’s found that even if an animal doesn’t show positive on both tests, one positive is usually a predictor that in two or three years, the individual will be proven to have Johne’s. “Let’s say she’s positive on the blood test but negative on the fecal, and you hold her. Eventually, I’d say 99% of the time, give it two or three years, and the fecal culture will be positive, as well. If you wait till that point, she’s spread it to more of the herd.” Brett adds there’s no test for calves, and many don’t consider the available blood and fecal tests indicative of Johne’s until an animal is 2 or 3 years of age. Even then, they are not foolproof. Clinical signs don’t generally emerge until an animal is 5 to 6 years of age. “The bacteria that causes Johne’s is absorbed primarily through the GI tract and shuts off the immune response,” the veterinarian explains. “It grows slowly over years and years and years.” Symptoms of Johne’s include chronic diarrhea and weight loss. The disease not only cuts short the animal’s life, it affects fertility, libido and milk production. Brett says it’s something that can devastate a farm once it hits. “Our industry needs to be more aware of Johne’s and understand that 90% of the time when there’s an outbreak on a farm, it came from something that producer bought and paid for. A good biosecurity plan is critical, as well as buying from breeders focused on a Johne’s-free herd.” ⦁ PHOTO: VICTORIA G. MYERS

He says if a bull is managed right, he will provide stellar service from 5 to 10 years of age. When choosing a bull, Pallone advises buyers to educate themselves regarding conformation of the breed and reputation of the producer. “Know something about the guy you’re buying bulls from,” he stresses. “There are a lot of good bull developers out there now. Genetic predisposition and slow development are key, but you also need to know what normal conformation looks like.” Pallone adds it’s important to cull bulls hard early in the development process. “Any foot or leg problems, claw or toe issues, or fluid building in their hocks—those are all telltale signs of trouble down the road,” Pallone says. “We don’t see much of that the way they feed those bulls at Town Creek. If I test 200 of their bulls at a time, I might have one or two a year that got past their initial culling.” By the time these bulls sell, Ladner says the 18-month-olds average 1,300 to 1,400 pounds; the 2-year-olds, 1,500 to 1,600 pounds. This year, prices on bulls averaged $4,435, a low point after prices had averaged between $6,500 and $7,000 since the sales started in 2013. Reznicek says the operation is still in a growth phase, currently selling between 150 and 200 bulls every October at its on-site sale. Also available are bred heifers from prior bull customers. The heifers are sired by a Town Creek bull and bred back to one. QUALITY CONTROL. Yearling bulls at Town Creek are ultrasounded for rib-eye area, marbling and fat thickness. Scrotal measurements are taken. Bulls with subpar or underdeveloped scrotums are culled. Feet, legs, hocks and hooves are also checked at this time. Bulls that don’t meet standards or are poor performers are out, as well. Within 30 days of sale, bulls are semen-tested and given complete breeding-soundness examinations. This includes physical exams, scrotal measurements, manual palpations and semen-sample collection, which scores motility and morphology of semen. Bulls are tested for trichomoniasis, BVD PI (bovine viral diarrhea, persistently infected) and Johne’s disease. A Johne’s-free herd is a specific area of emphasis for the breeders. They’ve been working with veterinarian Jim Brett, with Mississippi State University’s College of Veterinary Medicine, on an early-testing program to cull any animals that may carry this disease.

Town Creek Farm was featured in the March 2017 issue of the Progressive Farmer. The story titled, The Forage Based Bull, focuses on the Town Creek Farm Bull Development Program. Writer Victoria G. Myers authors the story.