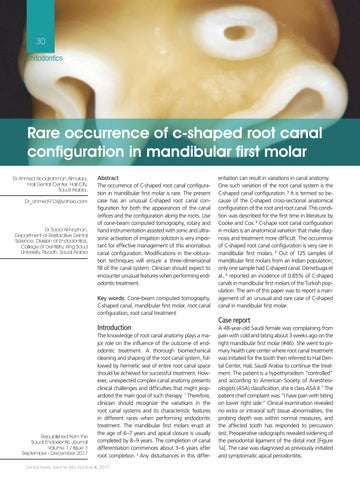 The knowledge of root canal anatomy plays a major role on the influence of the outcome of endodontic treatment. A thorough biomechanical cleaning and shaping of the root canal system, followed by hermetic seal of entire root canal space should be achieved for successful treatment. However, unexpected complex canal anatomy presents clinical challenges and difficulties that might jeopardized the main goal of such therapy. 1 Therefore, clinician should recognize the variations in the root canal systems and its characteristic features in different races when performing endodontic treatment. The mandibular first molars erupt at the age of 6–7 years and apical closure is usually completed by 8–9 years. The completion of canal differentiation commences about 3–6 years after root completion. 2 Any disturbances in this differ-

Case report A 48-year-old Saudi female was complaining from pain with cold and biting about 3 weeks ago on the right mandibular first molar (#46). She went to primary health care center where root canal treatment was initiated for the tooth then referred to Hail Dental Center, Hail, Saudi Arabia to continue the treatment. The patient is a hypothyroidism “controlled” and according to American Society of Anesthesiologists (ASA) classification, she is class ASA II. 7 The patient chief complaint was “I have pain with biting on lower right side.” Clinical examination revealed no extra or intraoral soft tissue abnormalities; the probing depth was within normal measures, and the affected tooth has responded to percussion test. Preoperative radiographs revealed widening of the periodontal ligament of the distal root [Figure 1a]. The case was diagnosed as previously initiated and symptomatic apical periodontitis. 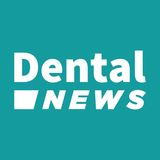