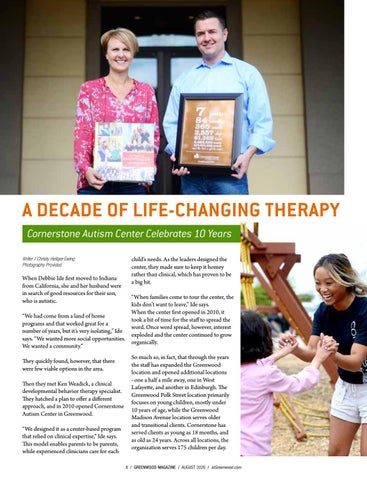 When Debbie Ide first moved to Indiana from California, she and her husband were in search of good resources for their son, who is autistic.

child’s needs. As the leaders designed the center, they made sure to keep it homey rather than clinical, which has proven to be a big hit.

“When families come to tour the center, the kids don’t want to leave,” Ide says. When the center first opened in 2010, it “We had come from a land of home took a bit of time for the staff to spread the programs and that worked great for a word. Once word spread, however, interest number of years, but it’s very isolating,” Ide exploded and the center continued to grow says. “We wanted more social opportunities. organically. We wanted a community.” They quickly found, however, that there were few viable options in the area. Then they met Ken Weadick, a clinical developmental behavior therapy specialist. They hatched a plan to offer a different approach, and in 2010 opened Cornerstone Autism Center in Greenwood. “We designed it as a center-based program that relied on clinical expertise,” Ide says. This model enables parents to be parents, while experienced clinicians care for each

So much so, in fact, that through the years the staff has expanded the Greenwood location and opened additional locations - one a half a mile away, one in West Lafayette, and another in Edinburgh. The Greenwood Polk Street location primarily focuses on young children, mostly under 10 years of age, while the Greenwood Madison Avenue location serves older and transitional clients. Cornerstone has served clients as young as 18 months, and as old as 24 years. Across all locations, the organization serves 175 children per day. 8 / GREENWOOD MAGAZINE / AUGUST 2020 / atGreenwood.com 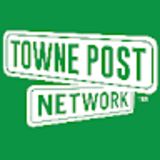