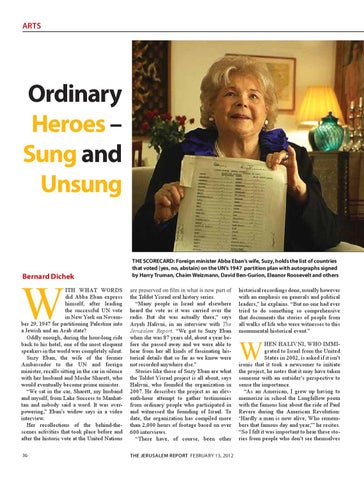 ITH WHAT WORDS did Abba Eban express himself, after leading the successful UN vote in New York on November 29, 1947 for partitioning Palestine into a Jewish and an Arab state? Oddly enough, during the hour-long ride back to his hotel, one of the most eloquent speakers in the world was completely silent. Suzy Eban, the wife of the former Ambassador to the UN and foreign minister, recalls sitting in the car in silence with her husband and Moshe Sharett, who would eventually become prime minister. “We sat in the car, Sharett, my husband and myself, from Lake Success to Manhattan and nobody said a word. It was overpowering,” Eban’s widow says in a video interview. Her recollections of the behind-thescenes activities that took place before and after the historic vote at the United Nations

DUH SUHVHUYHG RQ ¿OP LQ ZKDW LV QRZ SDUW RI the Toldot Yisrael oral history series. “Many people in Israel and elsewhere heard the vote as it was carried over the radio. But she was actually there,” says Aryeh Halivni, in an interview with The Jerusalem Report. “We got to Suzy Eban when she was 87 years old, about a year before she passed away and we were able to hear from her all kinds of fascinating historical details that so far as we know were not recorded anywhere else.” Stories like those of Suzy Eban are what the Toldot Yisrael project is all about, says Halivni, who founded the organization in 2007. He describes the project as an eleventh-hour attempt to gather testimonies from ordinary people who participated in and witnessed the founding of Israel. To date, the organization has compiled more than 2,000 hours of footage based on over 600 interviews. “There have, of course, been other

historical recordings done, usually however with an emphasis on generals and political leaders,” he explains. “But no one had ever tried to do something so comprehensive that documents the stories of people from all walks of life who were witnesses to this monumental historical event.”

HEN HALIVNI, WHO IMMIgrated to Israel from the United States in 2002, is asked if it isn’t ironic that it took a newcomer to initiate the project, he notes that it may have taken someone with an outsider’s perspective to sense the importance. “As an American, I grew up having to memorize in school the Longfellow poem with the famous line about the ride of Paul Revere during the American Revolution: ‘Hardly a man is now alive, Who remembers that famous day and year,’” he recites. “So I felt it was important to hear these stories from people who don’t see themselves

with an outsiderâ&amp;#x20AC;&amp;#x2122;s perspective. Oren, today Israelâ&amp;#x20AC;&amp;#x2122;s Ambassador to the United States, agreed to serve on the Toldot Yisrael steering committee and lend his name and support to the cause. Halivni points out that the Toldot Yisrael testimonies have by now well vindicated their academic value. Holding a newspaper clipping about the oleh hagardom group RI -HZLVK XQGHUJURXQG ÂżJKWHUV ZKR ZHUH executed by the British prior to the founding of the state, he describes the interview conducted with the sister of Mordechai Schwartz. â&amp;#x20AC;&amp;#x153;Until we interviewed Miriam Schwartz Rosenthal, historians listed only 12 members of the oleh hagardom. But testimony we recorded with her led to a reassessment and the accepted number is now 13. As this newspaper article shows, in a subsequent reunion of families the 6FKZDUW] IDPLO\ ZDV ÂżQDOO\ LQYLWHG Â´ The major use of the Toldot Yisrael tapes, however, has been outside the acaTHE JERUSALEM REPORT FEBRUARY 13, 2012

demic arena. The interviews have served as the basis for a mini-documentary series broadcast on the US History Channel and are part of an educational program for Jewish schools in the United States funded by the Jim Joseph Foundation. Segments also are presented on YouTube.

OST OF THE INTERVIEWEES are Israeli but the project has included personalities from all over the world, including testimonies E\ ZHOO NQRZQ LQWHUQDWLRQDO ÂżJXUHV whose connection to Israelâ&amp;#x20AC;&amp;#x2122;s struggle for independence has until now gone unnoticed. One of them is Vidal Sassoon, the English-born hair care products magnate. Sassoon describes how he was a member of a group of Jewish World War II veterans who broke up Fascist meetings in England and explains his motivation for coming to ,VUDHO WR ÂżJKW ZLWK WKH 3DOPDFK Âł:KHQ \RX think of 2,000 years of being put down and 37

suddenly you are a nation rising, it was a wonderful feeling.â&amp;#x20AC;? Another is Norman Lamm. The former Yeshiva University president, who was a chemistry student in the late 1940s, describes working in a clandestine upstate New York factory, manufacturing bullets that were smuggled to Israel. Most of the interviewees, however, did not become celebrities. Referring to the newly arrived Holocaust survivors, Halivni remarks, â&amp;#x20AC;&amp;#x153;No matter what their contribution to the war effort was, there was ultimately a heroic element.â&amp;#x20AC;? â&amp;#x20AC;&amp;#x153;Jack Slomovic, who later became a leader of the Los Angeles Jewish community, is an example of a kind of Holocaust survivor that we interviewed whose heroism during the War of Independence is expressed in the very fact that he came to Israel after all that he had been through during the war,â&amp;#x20AC;? says Halivni. He notes that while Slomovic was in a DP camp in Germany, he was able to obtain a visa that entitled him to go to the United States. â&amp;#x20AC;&amp;#x153;But after working with the bricha movement that helped Jews circumvent the British blockade and get into 3DOHVWLQH KH IHOW WKDW FRPLQJ KHUH WR ÂżJKW during the war was something that he had to do.â&amp;#x20AC;? One phenomenon that Halivni and his editors discovered as they reviewed the video recordings was that many of the interviewees had participated in similar events. â&amp;#x20AC;&amp;#x153;When descriptions of what were previously considered to be isolated incidents were pieced together, they suddenly took on a different form,â&amp;#x20AC;? says Halivni, using the story of the â&amp;#x20AC;&amp;#x153;shofar blowersâ&amp;#x20AC;? as an example. â&amp;#x20AC;&amp;#x153;The British had banned the blowing of the shofar at the Wailing Wall back in 1929 but every year, high school age youngsters would smuggle shofars into the Jewish Quarter on Yom Kippur. At the end of the fast day they would blow the shofar and then try to quickly run away,â&amp;#x20AC;? he notes. â&amp;#x20AC;&amp;#x153;Those who were caught served jail sentences of up to six months.â&amp;#x20AC;? After the Toldot Yisrael editors began to hear more and more of these accounts, they were able to eventually identify about PHQ ZKR KDG GHÂżHG WKH %ULWLVK 0LOLWDU\ Command in this symbolic way. The Toldot team arranged for six of the living shofar blowers to return to Jerusalemâ&amp;#x20AC;&amp;#x2122;s Western Wall and re-enact the ritual in front of the cameras. The re-enactment, edited together

VIDAL SASSOON: Fought with the Palmach

Dayan. He had incredible recall and multiple sessions with him stretched over 20 hours.â&amp;#x20AC;? Halivni notes that Bar-On described in detail his work with then-IDF Chief of Staff Dayan during the Sinai Campaign and the secret meetings Dayan conducted with French and British military leaders. Halivni, 38, who was known as Eric Weisberg before changing his name when he came to Israel, grew up in Cleveland where he was active in the Bnei Akiva youth movement. Prior to founding Toldot Yisrael, he worked for an organization that tries to bridge differences between secular and religious Jews. He lives in the community of Elazar in the Gush Etzion region in the West Bank. Sitting in a Tel Aviv cafĂŠ on a rainy winter day, Halivni speaks about Toldot Yisrael with a boyish enthusiasm, sounding almost as though he is explaining the SURMHFWÂśV UDWLRQDOH IRU WKH ÂżUVW WLPH Âł)XWXUH generations need to hear these stories,â&amp;#x20AC;? he says, noting that the portion of the more than 600,000 Jews who were present in Israel in 1948 who are still alive is rapidly dwindling. â&amp;#x20AC;&amp;#x153;There were an estimated 120,000 witnesses out there when we VWDUWHG IRXU \HDUV DJR EXW FXUUHQW ÂżJXUHV indicate that less than 50,000 remain.â&amp;#x20AC;? With time running out, Halivni is determined to interview another 400 people in order to reach a total of 1,000 witnesses. 7KRXJK ÂżQGLQJ IXQGLQJ KDV JURZQ KDUGHU Halivni does not plan on giving up. â&amp;#x20AC;&amp;#x153;This project,â&amp;#x20AC;? he explains, â&amp;#x20AC;&amp;#x153;gives me a chance to meet people who I consider to be my Â&amp;#x2021; heroes.

with the shofar blowersâ&amp;#x20AC;&amp;#x2122; recollections, resulted in a poignant History Channel program. 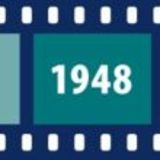