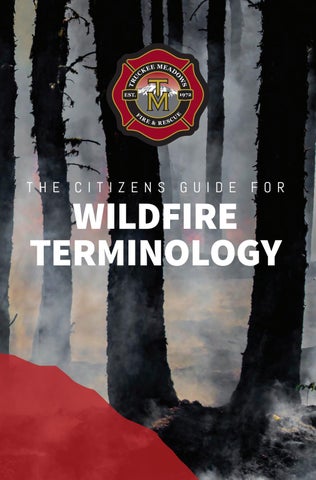 SIZE-UP! WHAT IS THE SIZE?

SMALL SPOT About the size of a campfire

LARGE SPOT About the size of a bonfire

ONE ACRE ≈ FOOTBALL FIELD If it is larger than a bonfire, the fire is described in square feet or acreage

WHAT TYPE OF FUEL IS BURNING? LIGHT FUELS Grass, weeds, and hay

If you are calling 911 to report a fire, these factors are helpful to both Dispatch and to the Fire Department :

WHAT IS THE RATE OF SPREAD?

SLOW Walking speed or no spread

WHAT IS THREATENED? STRUCTURES Are there structures nearby? How far away to the nearest structure?

SUBDIVISION Is the fire moving towards structures? Is one structure at risk or an entire subdivision?

LIVESTOCK Is the fire moving towards livestock?

TANKS Is the fire moving towards any outside tanks, like propane or fuel?

Used for off road fire attack, a Type 3 Engine has a minimum 500 gallon capacity and a minimum pump flow of 500 gallons per minute. The engine is 4 wheel drive, carries up to 4 personnel, is equipped with 1 inch hose, 1 ½ inch hose, 3 inch hose, and has the ability to pump and roll.

WATER TENDER Used to resupply engines or fill portable tanks, water tenders carry up to 3,000 gallons of water with an offload capacity of 500 gallons per minute. Water tenders are a vital component to fighting fires in areas that are without water hydrants.

TYPE 5 BRUSH ENGINE Used for direct attack on wildfires, a Type 5 engine carries a minimum of 150 gallons. This apparatus carries 4 personnel, is equipped with 1 inch hose, 1 ½ inch hose, can access areas a Type 3 can’t get to, and has the ability to pump and roll.

LADDER TRUCK The quintuple combination pumper, or a ladder truck has a 100-foot aerial platform used for fighting large scale fires. It can carry 250 gallons of water capable of pumping 2,000 gallons per minute. It is also equipped with advanced extrication equipment and tools for rescue and firefighting operations. Throughout the Fire District there are many residences, multi-family dwellings, and commercial occupancies that exceed the reach of the District’s ground ladders.

AMBULANCE The Fire District operates two ambulance at two strategically located District fire stations. The District always has at least one paramedic on duty at every station. Each ambulance is equipped to transport patients to hospitals.

DOZER The Fire District has two fire dozers that are used to construct fire lines by blading the ground, and removing combustible plant material down to bare soil.

NEVADA DEVISION OF FORESTRY (NDF) HELICOPTERS NDF has a primary focus of inter-agency sharing of resources for wildland firefighting. NDF has 3 helicopters based at the MindenTahoe Airport. The helicopters also transport ground firefighters and are capable of hoist operations.

WCSO RAVEN HELICOPTER RAVEN is an HH-1H Huey outfitted with a belly-mounted water tank with a capacity of 323 gallons of water, and 27 gallons of foam. RAVEN assists TMFPD with initial attack/firefighting, area mapping, and search and rescue. TRUCKEE MEADOWS FIRE PROTECTION DISTRICT

The UH-60 Black hawk is a twin-engine helicopter equipped with a bucket that can carry up to 660 gallons of water based at Stead Airport.

The CH-47 Chinook is a twin-engine helicopter equipped with a bucket that can carry up to 2,000 gallons of water based at Stead Airport. TRUCKEE MEADOWS FIRE PROTECTION DISTRICT

Air tankers based in Nevada during the fire season are contracted by the Bureau of Land Management and the United States Forest Service and are based at Stead Airport, Minden, and McClellan Air Force Base.

Follow the directions given by fire crews and law enforcement to stay safe.

Have an evacuation plan!

Practice your plan so that everyone knows where the “Go Bag” is kept, and is comfortable with loading family and pets.

Know the drill! Have a communication plan in place to include a neighborhood meeting place, a regional meeting place, and an out of town contact that will serve as the “hub” if family members can’t reach one another.

Stay informed! Sign-up for regional alerts at www. readywashoe.com* Washoe County has a telephone notification system for use in times of crisis. The system is known as “Code Red.“ While no system can ever be guaranteed to be disaster proof, local officials make every effort to keep the public informed. Every residence with a “land-line” installed telephone is in the 911 database. If you have an unlisted number, or wish to list your cell phone or work phone for emergency notification, you must sign-up. *Washoe County cannot guarantee the phone numbers will be included into emergency database.

Help us service you better by building a safer community through prevention, preparedness and response. Community Connect is a free, secure, and easy to use platform that allows you to share critical information about your household that will aid first responders and emergency response personnel when responding to your residence. Create or Update Your Profile Today at www.tmfpd.us.

COOPERATING AGENCY OR MUTUAL AID AGENCY An agency supplying assistance including but not limited to direct tactical or support functions or resources to the incident control effort. DIRECT ATTACK Any treatment applied directly to burning fuel such as wetting, smothering, or chemically quenching the fire or by physically separating the burning vegetation from unburned vegetation. EXPOSURE Property that may be endangered by a fire burning in another structure or by a wildfire. EXTENDED ATTACK A wildland fire that has not been contained or controlled by initial attack forces within the first 24 hours. The complexity level of the incident will increase beyond the capabilities of initial attack forces. FLANKS OF A FIRE Sides of the fire (left and right). HANDLINE Fireline constructed with hand tools, and the removal of vegetation. HEAD OF A FIRE The most rapidly spreading portion of a fire’s perimeter. A developing wildland fire can have multiple heads. INDIRECT ATTACK A method suppression in which the control line is located some considerable distance away from the fire’s active edge. Generally done in the case of a fast-spreading of high-intensity fire. INITIAL ATTACK (IA) A preplanned response to a wildfire given the wildfire’s potential. Initial attack may include size up, patrolling, monitoring, holding action or suppression within the first 24 hours.

KNOCK DOWN To extinguish the flame and reduce heat on the burning parts of a vegetation to prevent any further fire growth. MOP UP Extinguishing or removing burning/smoldering material near control lines, felling snags, and trenching logs to prevent rolling after an area has burned, to make a fire safe, or to reduce residual smoke. POCKETS OF A FIRE Unburned indentations in the fire edge formed by fingers or slow burning areas. RED FLAG WARNING A warning issued by the National Weather Service to alert the community of conditions that could lead to rapid or dramatic increases in wildfire activity. This may be any combination of low relative humidity, strong winds, and/or dry fuels. SCRATCH LINE An unfinished preliminary control line hastily established or constructed as an emergency measure to check the spread of fire. SPOTTING Behavior of a fire producing sparks or embers that are carried by the wind and which start new fires beyond the zone of direct ignition by the main fire. WET LINE A line of water, or water and chemical retardant, sprayed along the ground, and which serves as a temporary control line from which to ignite or stop a low-intensity fire. WIND-DRIVEN WILDLAND FIRE A wildland fire that is controlled by a strong consistent wind.

This publication is a helpful guide for the public on how Truckee Meadows Fire & Rescue provides support on wildfire incidents, and how to prepare for wildfire. 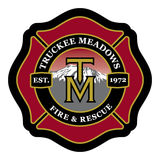