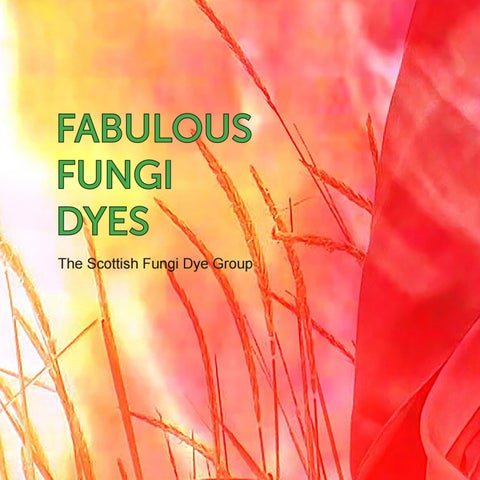 Fungi are vital for providing plants with nutrients they need to survive, through a massive unseen underground network. Since ancient times people have enjoyed and died eating fungi! They are also used for medicinal/hallucinogenic purposes. To our knowledge there are no records that show the dye properties of mushrooms being used for dyeing wool or other textile fibres before the 20th century.

History of using Fungi for dyes In the 1960’s Miriam Rice began working with natural dyes and after joining a workshop ‘Introduction to Mushrooms’,she found that a clump of Sulphur tufts gave a yellow dye. This was the start of finding a range of dye fungi and the word soon spread across the USA and to Scandinavia resulting in a bi-annual event called the International Fungi and Fibre Symposium. Scotland joined in 1993 when we hosted the 6th IFFS at Royal Edinburgh Botanic Gardens and many of us attended the 13th IFFS in January 2008 in Mendocino CA to celebrate Miriam’s 90th Birthday.

Dye Fungi In the UK

We have not found dye mushrooms in abundance. We believe this is mainly due to the way the land has been managed in the post war era. This lack of regard to the need for biodiversity, conservation/ protection of indigenous species has taken its toll. For us this has meant that we only pick for our own needs and that we have many fruitless searches for dye fungi. Some of the best dye fungi are poisonous and must be picked and used with care. We ask Fungi Dyers to adhere to a simple code of practice, as the fungi are not found in sustainable amounts in the UK only pick for personal use. To protect species and promote conservation we do not offer workshops which use large quantities of fungi. Instead we offer demonstrations, posters and exhibition displays for education purposes at meetings and other events. In many other countries dye fungi are more abundant.

Image opposite The Felt Fungi hanging (h 230cm) created entirely with Fungi dyed fleece was the first group project undertaken involving 18 members of the Scottish Felters group, the Scottish fungi group and two English members. The project was created over a full weekend with follow up presentation work after that.

In 1976, Marilyn was living in the south of England. Knitting sweaters for her two young children she wanted to make her own knitting yarn, so joined the East Sussex Guild of Spinners, Weavers and Dyers and learnt to spin. Soon she also became interested in dyeing her yarn with plants. In 1983 she moved to Lanark in Scotland where she started a weekly spinning group which still meets today! At a Perthshire gathering of spinners in 1991 Hjordis Hall Anderson came from Denmark explaining how to extract dyes from some species of fungi. Hjordis left some dried fungi for experimentation and a small Scottish Fungi Group was formed. In 1993 they hosted the 6th International Fungi and Fibre Symposium at Edinburgh Botanic Garden which started a long and fantastic fungi dye journey. With group projects, new friends worldwide and exploration of knitting, crochet, embroidery and felting and textured paper making, this has been a great part of her life for 30 years.

Trisha is a tapestry weaver and fungi dye artist having first learned to weave as a child. Completing a two day workshop on tapestry weaving in 1978 she fell in love with the creativity of this medium. She is now a prolific weaver with her work hung in exhibitions in the UK , Europe,Australia, the USA and Canada. In 1979 Trisha joined the local guild of Weavers Spinners and Dyers although with initial reservations about using dyes/chemicals in her kitchen and the associated environmental issues. However intrigued by a talk from Hjiodis Hall Anderson about the dye properties of fungi and the intensity of the dye colour achieved she decided to learn more about fungi. This has taken her on many forays in Scotland’s woods and to meet fungi dye friends in Scandinavia, USA ,Canada and Australia. She currently co-ordinates the International Fungi and Fibre Country Representatives bi-annual newsletter. Her designs are inspired by the landscape of Scotland, Indigenous and Arabic cultures. The excitement at seeing the colour emerge in the dye pots and solar jars continues as she explores and exhausts each dye bath.

Veronica Collins Veronica’s woven tapestry designs have been strongly influenced by fungi dyeing. The colours are earthy and alluring and conjure images of smell such as a ploughed field, an arbour of trees or a shady bracken filled hedgerow. The fungi pigments come from the earth and are not single molecules as with most chemical dyes. This complexity gives rise to their fascinating and magical quality. Veronica has found that colour often prompts design ideas, enriching the ability to see the depth of colour in the landscape. The “Wood Wide Web” is a good example of this. Trees are a recurring subject and the oranges of Cortinarius and the purples of Hapilopilus lend themselves to this theme. Tapestry weaving has been Veronica’s chosen art form for over thirty years, but she only discovered fungi and the special qualities of the dyes and the shading that can be obtained from successive dyebaths seven years ago. Dye fungi are hard to find and are rarely available to buy so the dye is very precious. In tapestry small pieces of yarn can be used and nothing is wasted. Dyed yarn can keep for decades and can be treasured and used in many pieces of work.

Su Grierson Su was a keen hobby spinner and plant dyer which fitted with her life on a farm with two young children. She became intrigued by the beautifully coloured textiles displayed in Museums with labels that declared them to be the product of ’natural dyes’ , and then the complete lack of information on the plants or the techniques being used. So started 17 years of research which culminated in the publication, in 1986, of her book ‘The Colour Cauldron : The History and use of natural dyes in Scotland’ and various papers. She was also a founding member of ‘Dyes in History and Archaeology’ an international meeting and journal . It was not until 1992 that she engaged with the newly found knowledge of Fungi dyeing and joined the Scottish group. Although now a contemporary artist with no time for actual dyeing Su has stayed in contact with the Scottish Fungi Dye group and assists with media, posters, video and organisational tasks. https//sugrierson.com.

Anna S King Annaâ&amp;#x20AC;&amp;#x2122;s work is founded on a close relationship with the natural world. It is the physical embodiment of a lifetimeâ&amp;#x20AC;&amp;#x2122;s collected stories, secrets, dreams and ideas derived from writings in notebooks, sketchbooks and travel journals. The work is the result of a direct emotional response: if you can write about it you can draw it; if you can draw it you can make it. In her textile/fibre work (woven tapestries, constructed textiles), she applies a modicum of basic craft skills, expanded over the years to embrace, papermaking, artist book binding and coiled basketry. A healthy respect for tradition and an educational grounding in traditional craft skills coupled with an imaginative approach to these disciplines has ensured a constant flow of ideas. Tradition should never be a burden, we carry it with us.

Fiona Moir Fiona has always been interested in colour and pattern. Learning to spin at a night class more than 30 years ago led to experiments with natural dyes. She produces different colours through the use of mordants and exhaust dyeing and has explored indigo dyeing using Shibori techniques to produce multiple patterns. She was intrigued to learn about Fungi dyeing and took part in two International Fungi Symposia and started collecting fungi for dyeing yarn for knitting, crochet and weaving. Collecting in the autumn she has dried fungi ready to use at any time of the year. In one experiment with Solar dyeing, a Kilner jar contained two types of fungi. At the bottom there was Cortinarius semisanguineus and at the top Innonotus hispidus. Left for six months, this one jar produced a range of colours from red through orange to golden yellow, on wool tops and silk. Her specialised dyeing methods add a unique element to her weaving, felt, quilting and handspun yarn which is used in both knitting and crochet. Fiona teaches a range of crafts in museums, for guilds and other groups and has been a tutor for the Association of Weavers, Spinners and Dyers Summer School. Solar dyed yarns Fiona Moir

This tapestry was inspired by the interrelationship between fungi and trees known as â&amp;#x20AC;&amp;#x153;The Wood Wide Webâ&amp;#x20AC;?. Fungi produce nutrients for the growing tree and the dying tree feeds the growing fungi. This process is at the heart of the life cycle of the forest. The work is very textured with additional warps and wrapped warps. This adds to the impression of trees, roots and deep dark crevices where fungi thrive. opposite page right A photo of the cross section of a tree and a simplified sketch provided the initial inspiration for the design. The image is also reminiscent of a spiders web which gives a satisfying link to the title.

Anna S King Paper made from Fungi. above Small bundles.

THE THISTLE QUILT The thistle quilt was made to display at the 8th Fungi and Fibre Symposium, held in Lake Saranac, USA, in 1997. Seven members of the Scottish Fungi Dye Group took over 400 hours to complete it. The main fabric is a fine wool flannel and the wadding and backing is cotton. Wool was used as it takes a stronger colour than cotton. Fungi dyes used were: Cortinarius sanguineus - reds. Cortinarius semisanguineus - peach. Hapilopilus nidulans - purples. Phaeolus schweinitzii + alum - gold. Phaeolus schweinitzii +iron - green. Innonotuus hispidus - yellow. Pisolithus arrhizus - brown.

Pigments Investigations by Mushroom Dye founder Miriam Rice into the possibilities presented by mushroom pigments led her to make crayons for drawing, or MycoStix, through the process of combining beeswax and mushroom pigment in powder form. Further work has been done with using the pigment for stains and paints.

This publication is produced by and Copyright of The Scottish Fungi Dye Group .