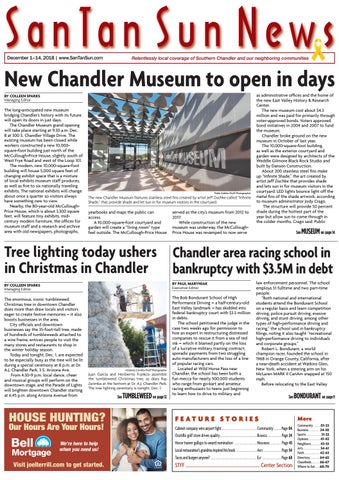 The long-anticipated new museum bridging Chandler’s history with its future will open its doors in just days. The Chandler Museum grand opening will take place starting at 9:30 a.m. Dec. 8 at 300 S. Chandler Village Drive. The existing museum has been closed while workers constructed a new 10,000square-foot building just north of the McCullough-Price House, slightly south of West Frye Road and west of the Loop 101. The modern, new 10,000-square-foot building will house 5,000 square feet of changing exhibit space that is a mixture of local exhibits museum staff produces, as well as five to six nationally traveling exhibits. The national exhibits will change about once a quarter so visitors always have something new to view. Nearby, the 80-year-old McCulloughPrice House, which is about 3,300 square feet, will feature tiny exhibits, midcentury modern furniture, the offices for museum staff and a research and archive area with old newspapers, photographs,

as administrative offices and the home of the new East Valley History &amp; Research Center. The new museum cost about $4.3 million and was paid for primarily through voter-approved bonds. Voters approved bond initiatives in 2004 and 2007 to fund the museum. Chandler broke ground on the new museum in October of last year. The 10,000-square-foot building, as well as the exterior courtyard and garden were designed by architects of the Weddle Gilmore Black Rock Studio and built by Danson Construction. About 200 stainless steel fins make up “Infinite Shade,” the art created by artist Jeff Zischke that provides shade and lets sun in for museum visitors in the courtyard. LED lights bounce light off the Pablo Robles/Staff Photographer The new Chandler Museum features stainless steel fi ns created by artist Jeff Zischke called “Infi nite metal fins of the shade artwork, according to museum administrator Jody Crago. Shade,” that provide shade and let sun in for museum visitors in the courtyard. The structure will provide 50 percent shade during the hottest part of the yearbooks and maps the public can served as the city’s museum from 2012 to year but allow sun to come through in access. 2017. the colder months, Crago said. Public A 10,000-square-foot courtyard and While construction of the new garden will create a “living room” type museum was underway, the McCulloughfeel outside. The McCullough-Price House Price House was revamped to now serve See on page 14

The enormous, iconic tumbleweed Christmas tree in downtown Chandler does more than draw locals and visitors eager to create festive memories – it also boosts businesses in the area. City officials and downtown businesses say the 35-foot-tall tree, made of hundreds of tumbleweeds attached to a wire frame, entices people to visit the many stores and restaurants to shop in the winter holiday season. Today and tonight, Dec. 1, are expected to be especially busy as the tree will be lit during a special ceremony at 8 p.m. at Dr. A.J. Chandler Park, 3 S. Arizona Ave. From 4:30-9 p.m. local dance, cheer and musical groups will perform on the downtown stage, and the Parade of Lights will brighten downtown Chandler starting at 6:45 p.m. along Arizona Avenue from

The Bob Bondurant School of High Performance Driving – a half-century-old East Valley landmark – has skidded into federal bankruptcy court with $3.5 million in debts. The school petitioned the judge in the case two weeks ago for permission to hire an expert in restructuring distressed companies to rescue it from a sea of red ink – which it blamed partly on the loss of a lucrative military training contract, sporadic payments from two struggling auto manufacturers and the loss of a line of popular racing cars. Located at Wild Horse Pass near Kimberly Carrillo/Staff Photographer Juan Garcia and Heribierto Frankco assemble Chandler, the school has been both a the tumbleweed Christmas tree, as does Ray fun mecca for nearly 500,000 students Zarimba at the bottom at Dr. A.J. Chandler Park. who range from go-kart and amateur The tree lighting ceremony is tonight, Dec. 1. racing enthusiasts to teens just beginning to learn how to drive to military and See on page 12

HOUSE HUNTING? Our Hours Are Your Hours! We’re here to help when you need us!

Visit joelterrill.com to get started.

law enforcement personnel. The school employs 31 fulltime and two part-time people. “Both national and international students attend the Bondurant School on a regular basis and learn competition driving, police pursuit driving, evasive driving, and stunt driving, among other types of high-performance driving and racing,” the school said in bankruptcy filings, noting it also taught “recreational high-performance driving to individuals and corporate groups.” Robert L. Bondurant, a world champion racer, founded the school in 1968 in Orange County, California, after a near-death accident at Watkins Glen, New York, when a steering arm on his McLaren MARK II CanAm snapped at 150 mph. Before relocating to the East Valley