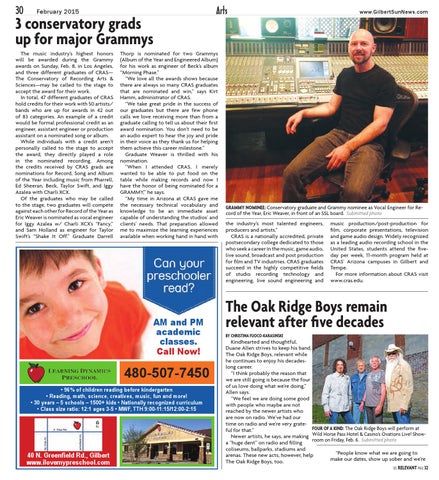 3 conservatory grads up for major Grammys The music industry’s highest honors will be awarded during the Grammy awards on Sunday, Feb. 8, in Los Angeles, and three different graduates of CRAS— The Conservatory of Recording Arts &amp; Sciences—may be called to the stage to accept the award for their work. In total, 47 different graduates of CRAS hold credits for their work with 50 artists/ bands who are up for awards in 42 out of 83 categories. An example of a credit would be formal professional credit as an engineer, assistant engineer or production assistant on a nominated song or album. While individuals with a credit aren’t personally called to the stage to accept the award, they directly played a role in the nominated recording. Among the credits received by CRAS grads are nominations for Record, Song and Album of the Year including music from Pharrell, Ed Sheeran, Beck, Taylor Swift, and Iggy Azalea with Charli XCX. Of the graduates who may be called to the stage, two graduates will compete against each other for Record of the Year as Eric Weaver is nominated as vocal engineer for Iggy Azalea w/ Charli XCX’s “Fancy,” and Sam Holland as engineer for Taylor Swift’s “Shake It Off.” Graduate Darrell

Thorp is nominated for two Grammys (Album of the Year and Engineered Album) for his work as engineer of Beck’s album “Morning Phase.” “We love all the awards shows because there are always so many CRAS graduates that are nominated and win,” says Kirt Hamm, administrator of CRAS. “We take great pride in the success of our graduates but there are few phone calls we love receiving more than from a graduate calling to tell us about their first award nomination. You don’t need to be an audio expert to hear the joy and pride in their voice as they thank us for helping them achieve this career milestone.” Graduate Weaver is thrilled with his nomination. “When I attended CRAS, I merely wanted to be able to put food on the table while making records and now I have the honor of being nominated for a GRAMMY,” he says. “My time in Arizona at CRAS gave me the necessary technical vocabulary and knowledge to be an immediate asset capable of understanding the studios’ and clients’ needs. That preparation allowed me to maximize the learning experiences available when working hand in hand with

GRAMMY NOMINEE: Conservatory graduate and Grammy nominee as Vocal Engineer for Record of the Year, Eric Weaver, in front of an SSL board. Submitted photo

the industry’s most talented engineers, producers and artists.” CRAS is a nationally accredited, private postsecondary college dedicated to those who seek a career in the music, game audio, live sound, broadcast and post production for film and TV industries. CRAS graduates succeed in the highly competitive fields of studio recording technology and engineering, live sound engineering and

Kindhearted and thoughtful, Duane Allen strives to keep his band, The Oak Ridge Boys, relevant while he continues to enjoy his decadeslong career. “I think probably the reason that we are still going is because the four of us love doing what we’re doing,” Allen says. “We feel we are doing some good with people who maybe are not reached by the newer artists who are now on radio. We’ve had our time on radio and we’re very grateFOUR OF A KIND: The Oak Ridge Boys will perform at ful for that.” Newer artists, he says, are making Wild Horse Pass Hotel &amp; Casino’s Ovations Live! Showroom on Friday, Feb. 6. Submitted photo a “huge dent” on radio and filling coliseums, ballparks, stadiums and “People know what we are going to arenas. These new acts, however, help make our dates, show up sober and we’re The Oak Ridge Boys, too.