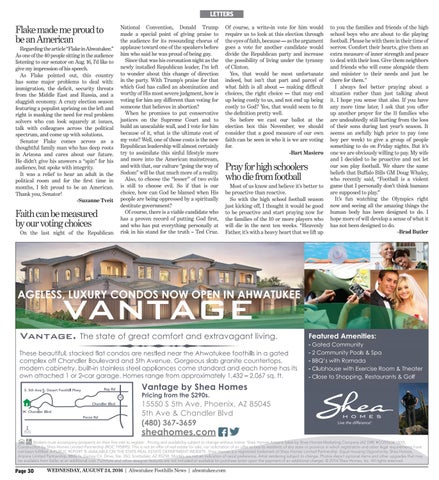 Flake made me proud to be an American Regarding the article “Flake in Ahwatukee.” As one of the 40 people sitting in the audience listening to our senator on Aug. 16, I’d like to give my impression of his speech. As Flake pointed out, this country has some major problems to deal with: immigration, the deficit, security threats from the Middle East and Russia, and a sluggish economy. A crazy election season featuring a populist uprising on the left and right is masking the need for real problem solvers who can look squarely at issues, talk with colleagues across the political spectrum, and come up with solutions. Senator Flake comes across as a thoughtful family man who has deep roots in Arizona and cares about our future. He didn’t give his answers a “spin” for his audience, but spoke with integrity. It was a relief to hear an adult in the political room and for the first time in months, I felt proud to be an American. Thank you, Senator! -Suzanne Tveit

National Convention, Donald Trump made a special point of giving praise to the audience for its resounding chorus of applause toward one of the speakers before him who said he was proud of being gay. Since that was his coronation night as the newly installed Republican leader, I’m left to wonder about this change of direction in the party. With Trump’s praise for that which God has called an abomination and worthy of His most severe judgment, how is voting for him any different than voting for someone that believes in abortion? When he promises to put conservative justices on the Supreme Court and to build an unscalable wall, and I vote for him because of it, what is the ultimate cost of my vote? Well, one of those costs is the new Republican leadership will almost certainly try to assimilate this sinful lifestyle more and more into the American mainstream, and with that, our culture “going the way of Sodom” will be that much more of a reality. Also, to choose the “lesser” of two evils is still to choose evil. So if that is our choice, how can God be blamed when His people are being oppressed by a spiritually destitute government? Of course, there is a viable candidate who has a proven record of putting God first, and who has put everything personally at risk in his stand for the truth – Ted Cruz.

Of course, a write-in vote for him would require us to look at this election through the eyes of faith, because — as the argument goes a vote for another candidate would divide the Republican party and increase the possibility of living under the tyranny of Clinton. Yes, that would be most unfortunate indeed, but isn’t that part and parcel of what faith is all about — making difficult choices, the right choice — that may end up being costly to us, and not end up being costly to God? Yes, that would seem to fit the definition pretty well. So before we cast our ballot at the election box this November, we should consider that a good measure of our own faith can be seen in who it is we are voting for. -Bart Masiero

Pray for high schoolers who die from football Most of us know and believe it’s better to be proactive than reactive. So with the high school football season just kicking off, I thought it would be good to be proactive and start praying now for the families of the 10 or more players who will die in the next ten weeks. “Heavenly Father, it’s with a heavy heart that we lift up

to you the families and friends of the high school boys who are about to die playing football. Please be with them in their time of sorrow. Comfort their hearts, give them an extra measure of inner strength and peace to deal with their loss. Give them neighbors and friends who will come alongside them and minister to their needs and just be there for them." I always feel better praying about a situation rather than just talking about it. I hope you sense that also. If you have any more time later, I ask that you offer up another prayer for the 11 families who are undoubtedly still hurting from the loss of their sons during last year’s season. It seems an awfully high price to pay (one boy per week) to give a group of people something to do on Friday nights. But it’s one we are obviously willing to pay. My wife and I decided to be proactive and not let our son play football. We share the same beliefs that Buffalo Bills GM Doug Whaley, who recently said, “Football is a violent game that I personally don’t think humans are supposed to play.” It’s fun watching the Olympics right now and seeing all the amazing things the human body has been designed to do. I hope more of will develop a sense of what it has not been designed to do. -Brad Butler