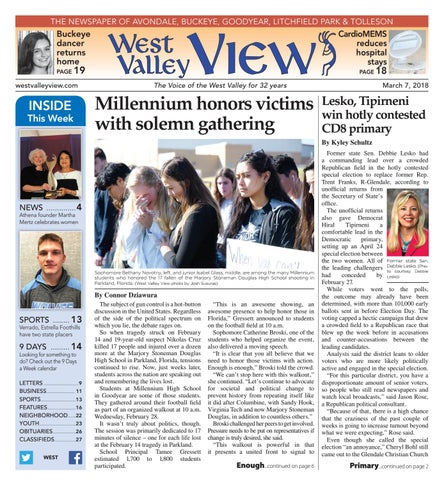 The Voice of the West Valley for 32 years

“This is an awesome showing, an awesome presence to help honor those in Florida,” Gressett announced to students on the football field at 10 a.m. Sophomore Catherine Broski, one of the students who helped organize the event, also delivered a moving speech. “It is clear that you all believe that we need to honor those victims with action. Enough is enough,” Broski told the crowd. “We can’t stop here with this walkout,” she continued. “Let’s continue to advocate for societal and political change to prevent history from repeating itself like it did after Columbine, with Sandy Hook, Virginia Tech and now Marjory Stoneman Douglas, in addition to countless others.” Broski challenged her peers to get involved. Pressure needs to be put on representatives if change is truly desired, she said. “This walkout is powerful in that it presents a united front to signal to

Former state Sen. Debbie Lesko had a commanding lead over a crowded Republican field in the hotly contested special election to replace former Rep. Trent Franks, R-Glendale, according to unofficial returns from the Secretary of State’s office. The unofficial returns also gave Democrat Hiral Tipirneni a comfortable lead in the Democratic primary, setting up an April 24 special election between the two women. All of Former state Sen. Lesko. (Phothe leading challengers Debbie to courtesy Debbie had conceded by Lesko) February 27. While voters went to the polls, the outcome may already have been determined, with more than 101,000 early ballots sent in before Election Day. The voting capped a hectic campaign that drew a crowded field to a Republican race that blew up the week before in accusations and counter-accusations between the leading candidates. Analysts said the district leans to older voters who are more likely politically active and engaged in the special election. “For this particular district, you have a disproportionate amount of senior voters, so people who still read newspapers and watch local broadcasts,” said Jason Rose, a Republican political consultant. “Because of that, there is a high chance that the craziness of the past couple of weeks is going to increase turnout beyond what we were expecting,” Rose said. Even though she called the special election “an annoyance,” Cheryl Bohl still came out to the Glendale Christian Church

The subject of gun control is a hot-button discussion in the United States. Regardless of the side of the political spectrum on which you lie, the debate rages on. So when tragedy struck on February 14 and 19-year-old suspect Nikolas Cruz killed 17 people and injured over a dozen more at the Marjory Stoneman Douglas High School in Parkland, Florida, tensions continued to rise. Now, just weeks later, students across the nation are speaking out and remembering the lives lost. Students at Millennium High School in Goodyear are some of those students. They gathered around their football field as part of an organized walkout at 10 a.m. Wednesday, February 28. It wasn’t truly about politics, though. The session was primarily dedicated to 17 minutes of silence – one for each life lost at the February 14 tragedy in Parkland. School Principal Tamee Gressett estimated 1,700 to 1,800 students participated.