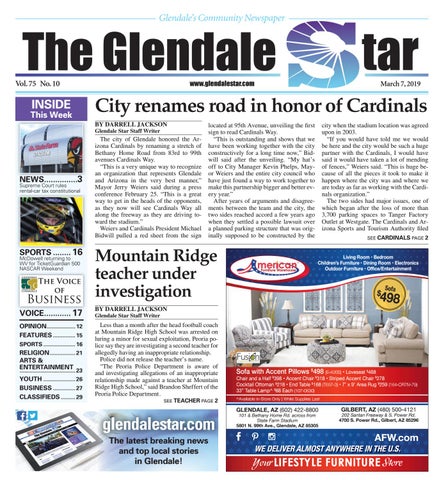 The city of Glendale honored the Arizona Cardinals by renaming a stretch of Bethany Home Road from 83rd to 99th avenues Cardinals Way. “This is a very unique way to recognize an organization that represents Glendale and Arizona in the very best manner,” Mayor Jerry Weiers said during a press conference February 25. “This is a great way to get in the heads of the opponents, as they now will see Cardinals Way all along the freeway as they are driving toward the stadium.” Weiers and Cardinals President Michael Bidwill pulled a red sheet from the sign

located at 95th Avenue, unveiling the first sign to read Cardinals Way. “This is outstanding and shows that we have been working together with the city constructively for a long time now,” Bidwill said after the unveiling. “My hat’s off to City Manager Kevin Phelps, Mayor Weiers and the entire city council who have just found a way to work together to make this partnership bigger and better every year.” After years of arguments and disagreements between the team and the city, the two sides reached accord a few years ago when they settled a possible lawsuit over a planned parking structure that was originally supposed to be constructed by the

Less than a month after the head football coach at Mountain Ridge High School was arrested on luring a minor for sexual exploitation, Peoria police say they are investigating a second teacher for allegedly having an inappropriate relationship. Police did not release the teacher’s name. “The Peoria Police Department is aware of and investigating allegations of an inappropriate relationship made against a teacher at Mountain Ridge High School,” said Brandon Sheffert of the Peoria Police Department.

city when the stadium location was agreed upon in 2003. “If you would have told me we would be here and the city would be such a huge partner with the Cardinals, I would have said it would have taken a lot of mending of fences,” Weiers said. “This is huge because of all the pieces it took to make it happen where the city was and where we are today as far as working with the Cardinals organization.” The two sides had major issues, one of which began after the loss of more than 3,700 parking spaces to Tanger Factory Outlet at Westgate. The Cardinals and Arizona Sports and Tourism Authority filed SEE CARDINALS PAGE 2

WE DELIVER ALMOST ANYWHERE IN THE U.S.