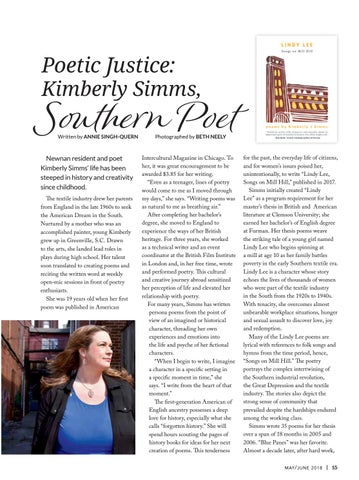 Newnan resident and poet Kimberly Simms’ life has been steeped in history and creativity since childhood. The textile industry drew her parents from England in the late 1960s to seek the American Dream in the South. Nurtured by a mother who was an accomplished painter, young Kimberly grew up in Greenville, S.C. Drawn to the arts, she landed lead roles in plays during high school. Her talent soon translated to creating poems and reciting the written word at weekly open-mic sessions in front of poetry enthusiasts. She was 19 years old when her first poem was published in American

Intercultural Magazine in Chicago. To her, it was great encouragement to be awarded $3.85 for her writing. “Even as a teenager, lines of poetry would come to me as I moved through my days,” she says. “Writing poems was as natural to me as breathing air.” After completing her bachelor’s degree, she moved to England to experience the ways of her British heritage. For three years, she worked as a technical writer and an event coordinator at the British Film Institute in London and, in her free time, wrote and performed poetry. This cultural and creative journey abroad sensitized her perception of life and elevated her relationship with poetry. For many years, Simms has written persona poems from the point of view of an imagined or historical character, threading her own experiences and emotions into the life and psyche of her fictional characters. “When I begin to write, I imagine a character in a specific setting in a specific moment in time,” she says. “I write from the heart of that moment.” The first-generation American of English ancestry possesses a deep love for history, especially what she calls “forgotten history.” She will spend hours scouting the pages of history books for ideas for her next creation of poems. This tenderness

for the past, the everyday life of citizens, and for women’s issues poised her, unintentionally, to write “Lindy Lee, Songs on Mill Hill,” published in 2017. Simms initially created “Lindy Lee” as a program requirement for her master’s thesis in British and American literature at Clemson University; she earned her bachelor’s of English degree at Furman. Her thesis poems weave the striking tale of a young girl named Lindy Lee who begins spinning at a mill at age 10 as her family battles poverty in the early Southern textile era. Lindy Lee is a character whose story echoes the lives of thousands of women who were part of the textile industry in the South from the 1920s to 1940s. With tenacity, she overcomes almost unbearable workplace situations, hunger and sexual assault to discover love, joy and redemption. Many of the Lindy Lee poems are lyrical with references to folk songs and hymns from the time period, hence, “Songs on Mill Hill.” The poetry portrays the complex intertwining of the Southern industrial revolution, the Great Depression and the textile industry. The stories also depict the strong sense of community that prevailed despite the hardships endured among the working class. Simms wrote 35 poems for her thesis over a span of 18 months in 2005 and 2006. “Blue Panes” was her favorite. Almost a decade later, after hard work, may/june 2018 | 15 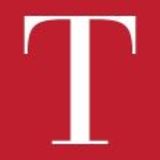