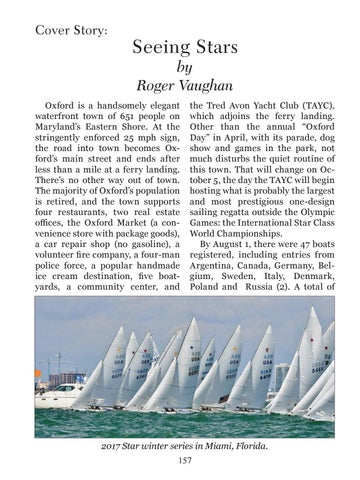 Oxford is a handsomely elegant waterfront town of 651 people on Maryland’s Eastern Shore. At the stringently enforced 25 mph sign, the road into town becomes Oxford’s main street and ends after less than a mile at a ferry landing. There’s no other way out of town. The majority of Oxford’s population is retired, and the town supports four restaurants, two real estate offices, the Oxford Market (a convenience store with package goods), a car repair shop (no gasoline), a volunteer fire company, a four-man police force, a popular handmade ice cream destination, five boatyards, a community center, and

the Tred Avon Yacht Club (TAYC), which adjoins the ferry landing. Other than the annual “Oxford Day” in April, with its parade, dog show and games in the park, not much disturbs the quiet routine of this town. That will change on October 5, the day the TAYC will begin hosting what is probably the largest and most prestigious one-design sailing regatta outside the Olympic Games: the International Star Class World Championships. By August 1, there were 47 boats registered, including entries from Argentina, Canada, Germany, Belgium, Sweden, Italy, Denmark, Poland and Russia (2). A total of