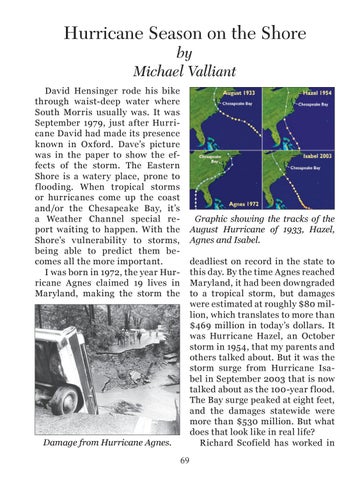 Hurricane Season on the Shore by Michael Valliant

David Hensinger rode his bike through waist-deep water where South Morris usually was. It was September 1979, just after Hurricane David had made its presence known in Oxford. Dave’s picture was in the paper to show the effects of the storm. The Eastern Shore is a watery place, prone to f looding. When tropical storms or hurricanes come up the coast and/or the Chesapeake Bay, it’s a Weather Channel special report waiting to happen. With the Shore’s vulnerability to storms, being able to predict them becomes all the more important. I was born in 1972, the year Hurricane Agnes claimed 19 lives in Maryland, making the storm the

Graphic showing the tracks of the August Hurricane of 1933, Hazel, Agnes and Isabel. deadliest on record in the state to this day. By the time Agnes reached Maryland, it had been downgraded to a tropical storm, but damages were estimated at roughly $80 million, which translates to more than $469 million in today’s dollars. It was Hurricane Hazel, an October storm in 1954, that my parents and others talked about. But it was the storm surge from Hurricane Isabel in September 2003 that is now talked about as the 100-year f lood. The Bay surge peaked at eight feet, and the damages statewide were more than $530 million. But what does that look like in real life? Richard Scofield has worked in