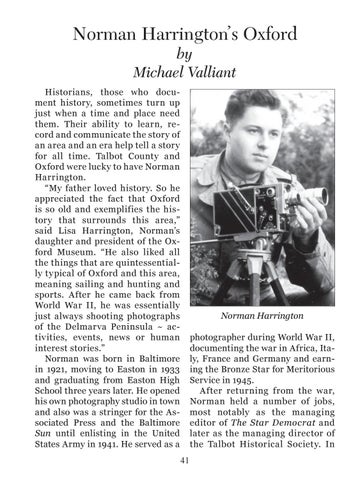 Historians, those who document history, sometimes turn up just when a time and place need them. Their ability to learn, record and communicate the story of an area and an era help tell a story for all time. Talbot County and Oxford were lucky to have Norman Harrington. “My father loved history. So he appreciated the fact that Oxford is so old and exemplifies the history that surrounds this area,” said Lisa Harrington, Norman’s daughter and president of the Oxford Museum. “He also liked all the things that are quintessentially typical of Oxford and this area, meaning sailing and hunting and sports. After he came back from World War II, he was essentially just always shooting photographs of the Delmarva Peninsula ~ activities, events, news or human interest stories.” Norman was born in Baltimore in 1921, moving to Easton in 1933 and graduating from Easton High School three years later. He opened his own photography studio in town and also was a stringer for the Associated Press and the Baltimore Sun until enlisting in the United States Army in 1941. He served as a

Norman Harrington photographer during World War II, documenting the war in Africa, Italy, France and Germany and earning the Bronze Star for Meritorious Service in 1945. After returning from the war, Norman held a number of jobs, most notably as the managing editor of The Star Democrat and later as the managing director of the Talbot Historical Society. In 41