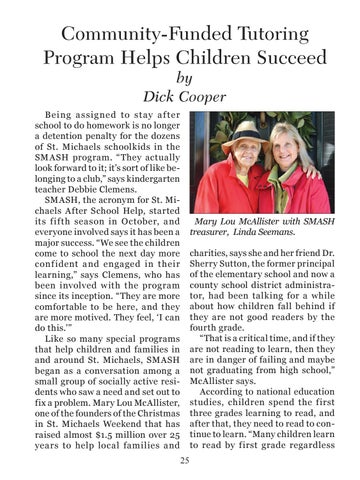 B ei ng a s sig ne d to s t ay a f ter school to do homework is no longer a detention penalty for the dozens of St. Michaels schoolkids in the SMASH program. “They actually look forward to it; it’s sort of like belonging to a club,” says kindergarten teacher Debbie Clemens. SMASH, the acronym for St. Michaels After School Help, started its f if th season in October, and everyone involved says it has been a major success. “We see the children come to school the next day more conf ident and engaged in t heir learning,” says Clemens, who has been involved with the program since its inception. “They are more comfortable to be here, and they are more motived. They feel, ‘I can do this.’” Like so many special programs that help children and families in and around St. Michaels, SMASH began as a conversation among a small group of socially active residents who saw a need and set out to fix a problem. Mary Lou McAllister, one of the founders of the Christmas in St. Michaels Weekend that has raised almost $1.5 million over 25 years to help local families and

Mary Lou McAllister with SMASH treasurer, Linda Seemans. charities, says she and her friend Dr. Sherry Sutton, the former principal of the elementary school and now a county school district administrator, had been talking for a while about how children fall behind if they are not good readers by the fourth grade. “That is a critical time, and if they are not reading to learn, then they are in danger of failing and maybe not graduating from high school,” McAllister says. According to national education studies, children spend the first three grades learning to read, and after that, they need to read to continue to learn. “Many children learn to read by first grade regardless 25