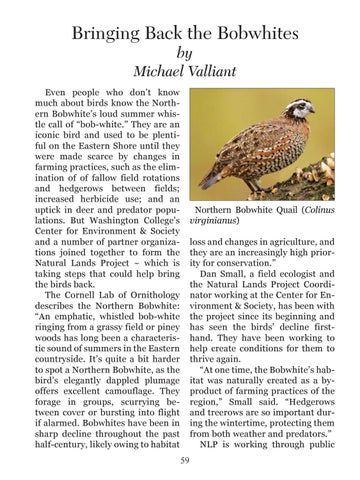 Bringing Back the Bobwhites by Michael Valliant

Even people who don’t know much about birds know the Northern Bobwhite’s loud summer whistle call of “bob-white.” They are an iconic bird and used to be plentiful on the Eastern Shore until they were made scarce by changes in farming practices, such as the elimination of of fallow field rotations and hedgerows between fields; increased herbicide use; and an uptick in deer and predator populations. But Washington College’s Center for Environment &amp; Society and a number of partner organizations joined together to form the Natural Lands Project ~ which is taking steps that could help bring the birds back. The Cornell Lab of Ornithology describes the Northern Bobwhite: “An emphatic, whistled bob-white ringing from a grassy field or piney woods has long been a characteristic sound of summers in the Eastern countryside. It’s quite a bit harder to spot a Northern Bobwhite, as the bird’s elegantly dappled plumage offers excellent camouflage. They forage in groups, scurrying between cover or bursting into flight if alarmed. Bobwhites have been in sharp decline throughout the past half-century, likely owing to habitat

Northern Bobwhite Quail (Colinus virginianus) loss and changes in agriculture, and they are an increasingly high priority for conservation.” Dan Small, a field ecologist and the Natural Lands Project Coordinator working at the Center for Environment &amp; Society, has been with the project since its beginning and has seen the birds’ decline firsthand. They have been working to help create conditions for them to thrive again. “At one time, the Bobwhite’s habitat was naturally created as a byproduct of farming practices of the region,” Small said. “Hedgerows and treerows are so important during the wintertime, protecting them from both weather and predators.” NLP is working through public 59