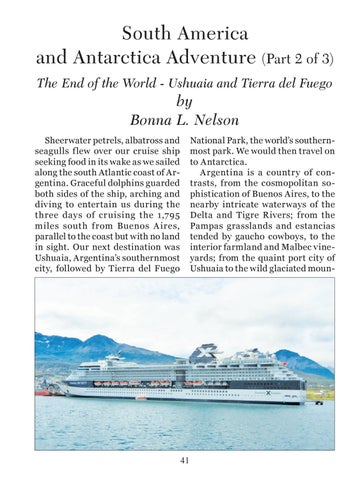 by Bonna L. Nelson Sheerwater petrels, albatross and seagulls f lew over our cruise ship seeking food in its wake as we sailed along the south Atlantic coast of Argentina. Graceful dolphins guarded both sides of the ship, arching and diving to entertain us during the three days of cruising the 1,795 miles south from Buenos A ires, parallel to the coast but with no land in sight. Our next destination was Ushuaia, Argentinaâ&amp;#x20AC;&amp;#x2122;s southernmost city, followed by Tierra del Fuego

National Park, the worldâ&amp;#x20AC;&amp;#x2122;s southernmost park. We would then travel on to Antarctica. Argentina is a country of contrasts, from the cosmopolitan sophistication of Buenos Aires, to the nearby intricate waterways of the Delta and Tigre Rivers; from the Pampas grasslands and estancias tended by gaucho cowboys, to the interior farmland and Malbec vineyards; from the quaint port city of Ushuaia to the wild glaciated moun-