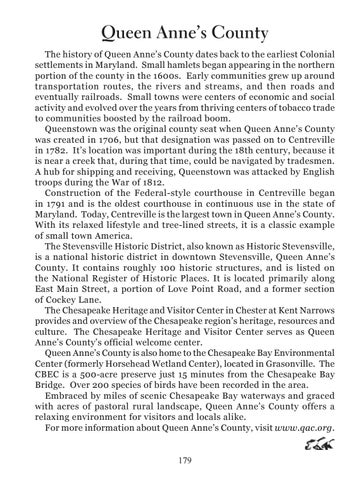 Queen Anne’s County The history of Queen Anne’s County dates back to the earliest Colonial settlements in Maryland. Small hamlets began appearing in the northern portion of the county in the 1600s. Early communities grew up around transportation routes, the rivers and streams, and then roads and eventually railroads. Small towns were centers of economic and social activity and evolved over the years from thriving centers of tobacco trade to communities boosted by the railroad boom. Queenstown was the original county seat when Queen Anne’s County was created in 1706, but that designation was passed on to Centreville in 1782. It’s location was important during the 18th century, because it is near a creek that, during that time, could be navigated by tradesmen. A hub for shipping and receiving, Queenstown was attacked by English troops during the War of 1812. Construction of the Federal-style courthouse in Centreville began in 1791 and is the oldest courthouse in continuous use in the state of Maryland. Today, Centreville is the largest town in Queen Anne’s County. With its relaxed lifestyle and tree-lined streets, it is a classic example of small town America. The Stevensville Historic District, also known as Historic Stevensville, is a national historic district in downtown Stevensville, Queen Anne’s County. It contains roughly 100 historic structures, and is listed on the National Register of Historic Places. It is located primarily along East Main Street, a portion of Love Point Road, and a former section of Cockey Lane. The Chesapeake Heritage and Visitor Center in Chester at Kent Narrows provides and overview of the Chesapeake region’s heritage, resources and culture. The Chesapeake Heritage and Visitor Center serves as Queen Anne’s County’s official welcome center. Queen Anne’s County is also home to the Chesapeake Bay Environmental Center (formerly Horsehead Wetland Center), located in Grasonville. The CBEC is a 500-acre preserve just 15 minutes from the Chesapeake Bay Bridge. Over 200 species of birds have been recorded in the area. Embraced by miles of scenic Chesapeake Bay waterways and graced with acres of pastoral rural landscape, Queen Anne’s County offers a relaxing environment for visitors and locals alike. For more information about Queen Anne’s County, visit www.qac.org. 179