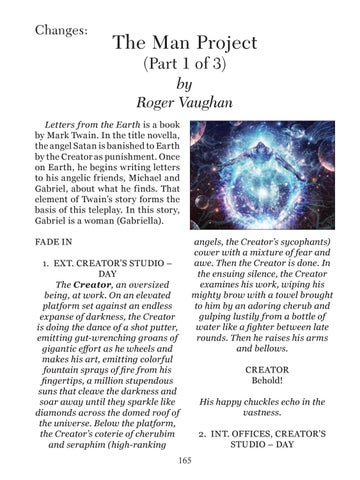 by Roger Vaughan Letters from the Earth is a book by Mark Twain. In the title novella, the angel Satan is banished to Earth by the Creator as punishment. Once on Earth, he begins writing letters to his angelic friends, Michael and Gabriel, about what he finds. That element of Twain’s story forms the basis of this teleplay. In this story, Gabriel is a woman (Gabriella). FADE IN 1. EXT. CREATOR’S STUDIO – DAY The Creator, an oversized being, at work. On an elevated platform set against an endless expanse of darkness, the Creator is doing the dance of a shot putter, emitting gut-wrenching groans of gigantic effort as he wheels and makes his art, emitting colorful fountain sprays of fire from his fingertips, a million stupendous suns that cleave the darkness and soar away until they sparkle like diamonds across the domed roof of the universe. Below the platform, the Creator’s coterie of cherubim and seraphim (high-ranking

angels, the Creator’s sycophants) cower with a mixture of fear and awe. Then the Creator is done. In the ensuing silence, the Creator examines his work, wiping his mighty brow with a towel brought to him by an adoring cherub and gulping lustily from a bottle of water like a fighter between late rounds. Then he raises his arms and bellows.