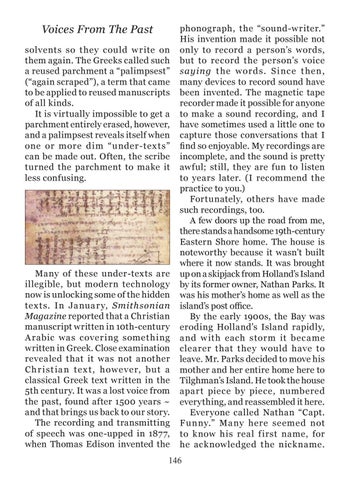 Voices From The Past solvents so they could w r ite on them again. The Greeks called such a reused parchment a “palimpsest” (“again scraped”), a term that came to be applied to reused manuscripts of all kinds. It is virtually impossible to get a parchment entirely erased, however, and a palimpsest reveals itself when one or more d im “under-tex t s” can be made out. Often, the scribe turned the parchment to make it less confusing.

Many of these under-texts are illegible, but modern technology now is unlocking some of the hidden tex ts. In Januar y, Smith sonian Magazine reported that a Christian manuscript written in 10th-century A rabic was cover ing something written in Greek. Close examination revealed that it was not another Ch r i s t i a n te x t , howe ver, but a classical Greek text written in the 5th century. It was a lost voice from the past, found after 1500 years ~ and that brings us back to our story. The recording and transmitting of speech was one-upped in 1877, when Thomas Edison invented the

phonograph, the “sound-writer.” His invention made it possible not only to record a person’s words, but to record the person’s voice s ay ing t he wor d s. Si nc e t hen, many devices to record sound have been invented. The magnetic tape recorder made it possible for anyone to make a sound recording, and I have sometimes used a little one to capture those conversations that I find so enjoyable. My recordings are incomplete, and the sound is pretty awful; still, they are fun to listen to years later. (I recommend the practice to you.) Fortunately, others have made such recordings, too. A few doors up the road from me, there stands a handsome 19th-century Eastern Shore home. The house is noteworthy because it wasn’t built where it now stands. It was brought up on a skipjack from Holland’s Island by its former owner, Nathan Parks. It was his mother’s home as well as the island’s post office. By the early 1900s, the Bay was eroding Holland’s Island rapidly, and w it h each stor m it became clearer that they would have to leave. Mr. Parks decided to move his mother and her entire home here to Tilghman’s Island. He took the house apar t piece by piece, numbered everything, and reassembled it here. Everyone called Nathan “Capt. Funny.” Many here seemed not to know his real first name, for he acknowledged the nickname.