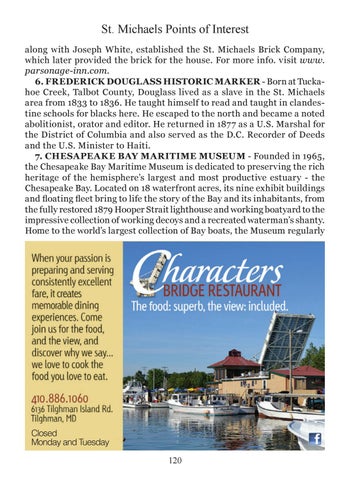 St. Michaels Points of Interest along with Joseph White, established the St. Michaels Brick Company, which later provided the brick for the house. For more info. visit www. parsonage-inn.com. 6. FREDERICK DOUGLASS HISTORIC MARKER - Born at Tuckahoe Creek, Talbot County, Douglass lived as a slave in the St. Michaels area from 1833 to 1836. He taught himself to read and taught in clandestine schools for blacks here. He escaped to the north and became a noted abolitionist, orator and editor. He returned in 1877 as a U.S. Marshal for the District of Columbia and also served as the D.C. Recorder of Deeds and the U.S. Minister to Haiti. 7. CHESAPEAKE BAY MARITIME MUSEUM - Founded in 1965, the Chesapeake Bay Maritime Museum is dedicated to preserving the rich heritage of the hemisphere’s largest and most productive estuary - the Chesapeake Bay. Located on 18 waterfront acres, its nine exhibit buildings and floating fleet bring to life the story of the Bay and its inhabitants, from the fully restored 1879 Hooper Strait lighthouse and working boatyard to the impressive collection of working decoys and a recreated waterman’s shanty. Home to the world’s largest collection of Bay boats, the Museum regularly