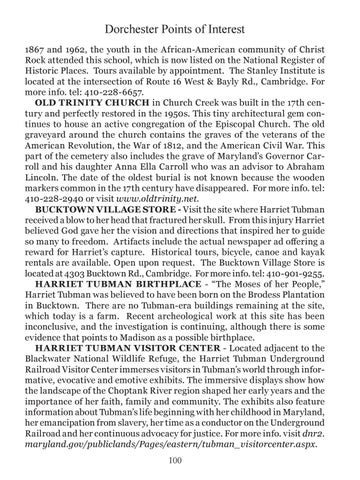 Dorchester Points of Interest 1867 and 1962, the youth in the African-American community of Christ Rock attended this school, which is now listed on the National Register of Historic Places. Tours available by appointment. The Stanley Institute is located at the intersection of Route 16 West &amp; Bayly Rd., Cambridge. For more info. tel: 410-228-6657. OLD TRINITY CHURCH in Church Creek was built in the 17th century and perfectly restored in the 1950s. This tiny architectural gem continues to house an active congregation of the Episcopal Church. The old graveyard around the church contains the graves of the veterans of the American Revolution, the War of 1812, and the American Civil War. This part of the cemetery also includes the grave of Maryland’s Governor Carroll and his daughter Anna Ella Carroll who was an advisor to Abraham Lincoln. The date of the oldest burial is not known because the wooden markers common in the 17th century have disappeared. For more info. tel: 410-228-2940 or visit www.oldtrinity.net. BUCKTOWN VILLAGE STORE - Visit the site where Harriet Tubman received a blow to her head that fractured her skull. From this injury Harriet believed God gave her the vision and directions that inspired her to guide so many to freedom. Artifacts include the actual newspaper ad offering a reward for Harriet’s capture. Historical tours, bicycle, canoe and kayak rentals are available. Open upon request. The Bucktown Village Store is located at 4303 Bucktown Rd., Cambridge. For more info. tel: 410-901-9255. HARRIET TUBMAN BIRTHPLACE - “The Moses of her People,” Harriet Tubman was believed to have been born on the Brodess Plantation in Bucktown. There are no Tubman-era buildings remaining at the site, which today is a farm. Recent archeological work at this site has been inconclusive, and the investigation is continuing, although there is some evidence that points to Madison as a possible birthplace. HARRIET TUBMAN VISITOR CENTER - Located adjacent to the Blackwater National Wildlife Refuge, the Harriet Tubman Underground Railroad Visitor Center immerses visitors in Tubman’s world through informative, evocative and emotive exhibits. The immersive displays show how the landscape of the Choptank River region shaped her early years and the importance of her faith, family and community. The exhibits also feature information about Tubman’s life beginning with her childhood in Maryland, her emancipation from slavery, her time as a conductor on the Underground Railroad and her continuous advocacy for justice. For more info. visit dnr2. maryland.gov/publiclands/Pages/eastern/tubman_visitorcenter.aspx. 100