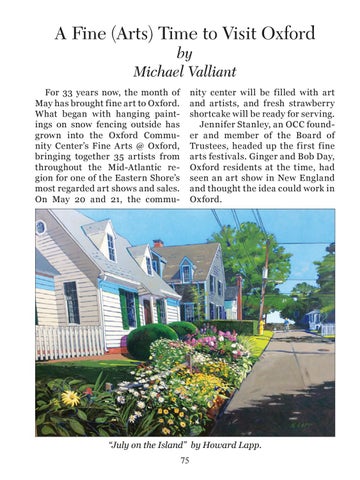 A Fine (Arts) Time to Visit Oxford by Michael Valliant

For 33 years now, the month of May has brought fine art to Oxford. What began with hanging paintings on snow fencing outside has grown into the Oxford Community Center’s Fine Arts @ Oxford, bringing together 35 artists from throughout the Mid-Atlantic region for one of the Eastern Shore’s most regarded art shows and sales. On May 20 and 21, the commu-

nity center will be filled with art and artists, and fresh strawberry shortcake will be ready for serving. Jennifer Stanley, an OCC founder and member of the Board of Trustees, headed up the first fine arts festivals. Ginger and Bob Day, Oxford residents at the time, had seen an art show in New England and thought the idea could work in Oxford.