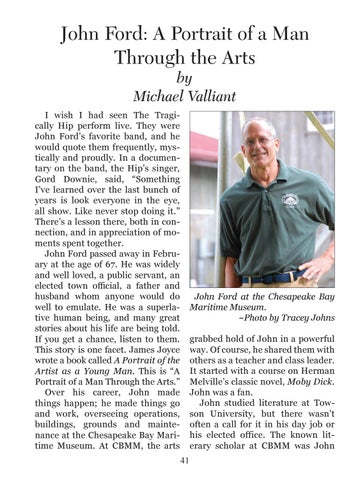 John Ford: A Portrait of a Man Through the Arts by Michael Valliant

I wish I had seen The Tragically Hip perform live. They were John Ford’s favorite band, and he would quote them frequently, mystically and proudly. In a documentary on the band, the Hip’s singer, Gord Downie, said, “Something I’ve learned over the last bunch of years is look everyone in the eye, all show. Like never stop doing it.” There’s a lesson there, both in connection, and in appreciation of moments spent together. John Ford passed away in February at the age of 67. He was widely and well loved, a public servant, an elected town official, a father and husband whom anyone would do well to emulate. He was a superlative human being, and many great stories about his life are being told. If you get a chance, listen to them. This story is one facet. James Joyce wrote a book called A Portrait of the Artist as a Young Man. This is “A Portrait of a Man Through the Arts.” Over his career, John made things happen; he made things go and work, overseeing operations, buildings, grounds and maintenance at the Chesapeake Bay Maritime Museum. At CBMM, the arts

John Ford at the Chesapeake Bay Maritime Museum. ~Photo by Tracey Johns grabbed hold of John in a powerful way. Of course, he shared them with others as a teacher and class leader. It started with a course on Herman Melville’s classic novel, Moby Dick. John was a fan. John studied literature at Towson University, but there wasn’t often a call for it in his day job or his elected office. The known literary scholar at CBMM was John 41