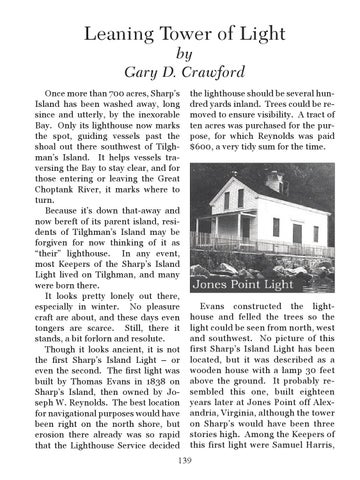 Once more than 700 acres, Sharp’s Island has been washed away, long since and utterly, by the inexorable Bay. Only its lighthouse now marks the spot, guiding vessels past the shoal out there southwest of Tilghman’s Island. It helps vessels traversing the Bay to stay clear, and for those entering or leaving the Great Choptank River, it marks where to turn. Because it’s down that-away and now bereft of its parent island, residents of Tilghman’s Island may be forgiven for now thinking of it as “their” lighthouse. In any event, most Keepers of the Sharp’s Island Light lived on Tilghman, and many were born there. It looks pretty lonely out there, especially in winter. No pleasure craft are about, and these days even tongers are scarce. Still, there it stands, a bit forlorn and resolute. Though it looks ancient, it is not the first Sharp’s Island Light – or even the second. The first light was built by Thomas Evans in 1838 on Sharp’s Island, then owned by Joseph W. Reynolds. The best location for navigational purposes would have been right on the north shore, but erosion there already was so rapid that the Lighthouse Service decided

the lighthouse should be several hundred yards inland. Trees could be removed to ensure visibility. A tract of ten acres was purchased for the purpose, for which Reynolds was paid $600, a very tidy sum for the time.

Evans constructed the lighthouse and felled the trees so the light could be seen from north, west and southwest. No picture of this first Sharp’s Island Light has been located, but it was described as a wooden house with a lamp 30 feet above the ground. It probably resembled this one, built eighteen years later at Jones Point off Alexandria, Virginia, although the tower on Sharp’s would have been three stories high. Among the Keepers of this first light were Samuel Harris,