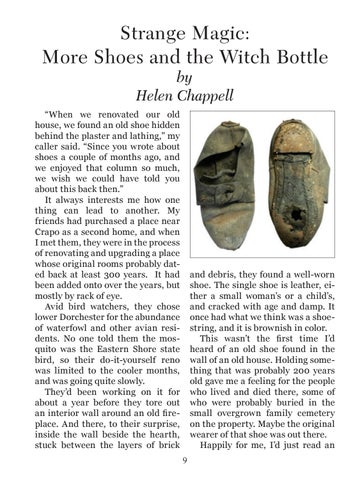 “When we renovated our old house, we found an old shoe hidden behind the plaster and lathing,” my caller said. “Since you wrote about shoes a couple of months ago, and we enjoyed that column so much, we wish we could have told you about this back then.” It always interests me how one thing can lead to another. My friends had purchased a place near Crapo as a second home, and when I met them, they were in the process of renovating and upgrading a place whose original rooms probably dated back at least 300 years. It had been added onto over the years, but mostly by rack of eye. Avid bird watchers, they chose lower Dorchester for the abundance of waterfowl and other avian residents. No one told them the mosquito was the Eastern Shore state bird, so their do-it-yourself reno was limited to the cooler months, and was going quite slowly. They’d been working on it for about a year before they tore out an interior wall around an old fireplace. And there, to their surprise, inside the wall beside the hearth, stuck between the layers of brick

and debris, they found a well-worn shoe. The single shoe is leather, either a small woman’s or a child’s, and cracked with age and damp. It once had what we think was a shoestring, and it is brownish in color. This wasn’t the first time I’d heard of an old shoe found in the wall of an old house. Holding something that was probably 200 years old gave me a feeling for the people who lived and died there, some of who were probably buried in the small overgrown family cemetery on the property. Maybe the original wearer of that shoe was out there. Happily for me, I’d just read an 9