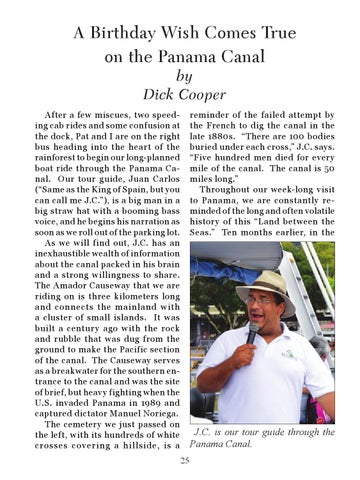 After a few miscues, two speeding cab rides and some confusion at the dock, Pat and I are on the right bus heading into the heart of the rainforest to begin our long-planned boat ride through the Panama Canal. Our tour guide, Juan Carlos (“Same as the King of Spain, but you can call me J.C.”), is a big man in a big straw hat with a booming bass voice, and he begins his narration as soon as we roll out of the parking lot. As we will find out, J.C. has an inexhaustible wealth of information about the canal packed in his brain and a strong willingness to share. The Amador Causeway that we are riding on is three kilometers long and connects the mainland with a cluster of small islands. It was built a century ago with the rock and rubble that was dug from the ground to make the Pacific section of the canal. The Causeway serves as a breakwater for the southern entrance to the canal and was the site of brief, but heavy fighting when the U.S. invaded Panama in 1989 and captured dictator Manuel Noriega. The cemetery we just passed on the left, with its hundreds of white crosses covering a hillside, is a

reminder of the failed attempt by the French to dig the canal in the late 1880s. “There are 100 bodies buried under each cross,” J.C. says. “Five hundred men died for every mile of the canal. The canal is 50 miles long.” Throughout our week-long visit to Panama, we are constantly reminded of the long and often volatile history of this “Land between the Seas.” Ten months earlier, in the

J.C. is our tour guide through the Panama Canal. 25