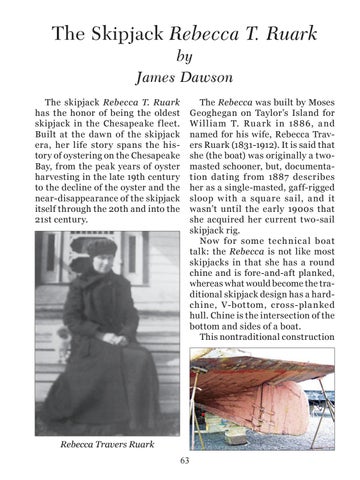 The Skipjack Rebecca T. Ruark by James Dawson The skipjack Rebecca T. Ruark has the honor of being the oldest skipjack in the Chesapeake f leet. Built at the dawn of the skipjack era, her life story spans the history of oystering on the Chesapeake Bay, from the peak years of oyster harvesting in the late 19th century to the decline of the oyster and the near-disappearance of the skipjack itself through the 20th and into the 21st century.

The Rebecca was built by Moses Geoghegan on Taylorâ&#x20AC;&#x2122;s Island for Wi l lia m T. Rua rk in 1886, a nd named for his wife, Rebecca Travers Ruark (1831-1912). It is said that she (the boat) was originally a twomasted schooner, but, documentation dating from 1887 describes her as a single-masted, gaff-rigged sloop w ith a square sail, and it wasnâ&#x20AC;&#x2122;t until the early 1900s that she acquired her current two-sail skipjack rig. Now for some technic a l boat talk: the Rebecca is not like most skipjacks in that she has a round chine and is fore-and-aft planked, whereas what would become the traditional skipjack design has a hardchine, V-bot tom, cross-planked hull. Chine is the intersection of the bottom and sides of a boat. This nontraditional construction