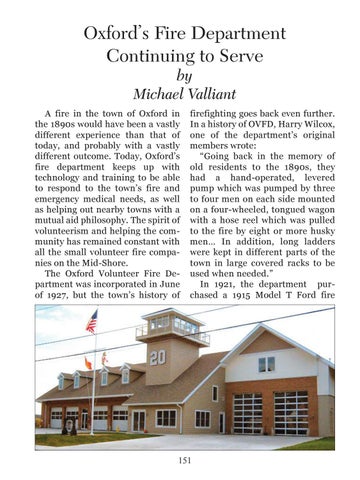 A fire in the town of Oxford in the 1890s would have been a vastly different experience than that of today, and probably with a vastly different outcome. Today, Oxford’s fire department keeps up with technology and training to be able to respond to the town’s fire and emergency medical needs, as well as helping out nearby towns with a mutual aid philosophy. The spirit of volunteerism and helping the community has remained constant with all the small volunteer fire companies on the Mid-Shore. The Oxford Volunteer Fire Department was incorporated in June of 1927, but the town’s history of

firefighting goes back even further. In a history of OVFD, Harry Wilcox, one of the department’s original members wrote: “Going back in the memory of old residents to the 1890s, they had a hand-operated, levered pump which was pumped by three to four men on each side mounted on a four-wheeled, tongued wagon with a hose reel which was pulled to the fire by eight or more husky men… In addition, long ladders were kept in different parts of the town in large covered racks to be used when needed.” In 1921, the department purchased a 1915 Model T Ford fire