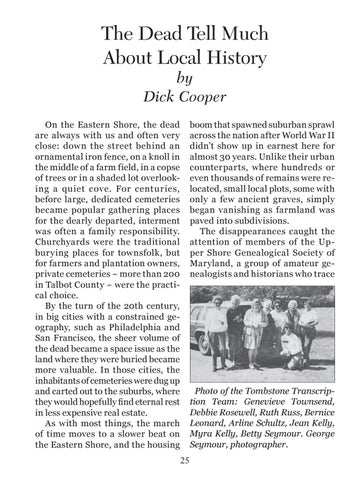 The Dead Tell Much About Local History by Dick Cooper

boom that spawned suburban sprawl across the nation after World War II didnâ&amp;#x20AC;&amp;#x2122;t show up in earnest here for almost 30 years. Unlike their urban counterparts, where hundreds or even thousands of remains were relocated, small local plots, some with only a few ancient graves, simply began vanishing as farmland was paved into subdivisions. The disappearances caught the attention of members of the Upper Shore Genealogical Society of Maryland, a group of amateur genealogists and historians who trace

On the Eastern Shore, the dead are always with us and often very close: down the street behind an ornamental iron fence, on a knoll in the middle of a farm field, in a copse of trees or in a shaded lot overlooking a quiet cove. For centuries, before large, dedicated cemeteries became popular gathering places for the dearly departed, interment was often a family responsibility. Churchyards were the traditional burying places for townsfolk, but for farmers and plantation owners, private cemeteries ~ more than 200 in Talbot County ~ were the practical choice. By the turn of the 20th century, in big cities with a constrained geography, such as Philadelphia and San Francisco, the sheer volume of the dead became a space issue as the land where they were buried became more valuable. In those cities, the inhabitants of cemeteries were dug up and carted out to the suburbs, where they would hopefully find eternal rest in less expensive real estate. As with most things, the march of time moves to a slower beat on the Eastern Shore, and the housing