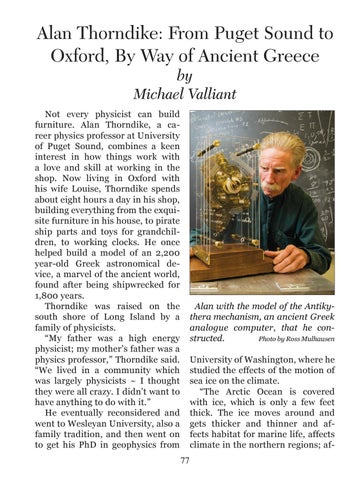 Alan Thorndike: From Puget Sound to Oxford, By Way of Ancient Greece by Michael Valliant

Not every physicist can build furniture. Alan Thorndike, a career physics professor at University of Puget Sound, combines a keen interest in how things work with a love and skill at working in the shop. Now living in Oxford with his wife Louise, Thorndike spends about eight hours a day in his shop, building everything from the exquisite furniture in his house, to pirate ship parts and toys for grandchildren, to working clocks. He once helped build a model of an 2,200 year-old Greek astronomical device, a marvel of the ancient world, found after being shipwrecked for 1,800 years. Thorndike was raised on the south shore of Long Island by a family of physicists. “My father was a high energy physicist; my mother’s father was a physics professor,” Thorndike said. “We lived in a community which was largely physicists ~ I thought they were all crazy. I didn’t want to have anything to do with it.” He eventually reconsidered and went to Wesleyan University, also a family tradition, and then went on to get his PhD in geophysics from

Alan with the model of the Antikythera mechanism, an ancient Greek analogue computer, that he constructed. Photo by Ross Mulhausen University of Washington, where he studied the effects of the motion of sea ice on the climate. “The Arctic Ocean is covered with ice, which is only a few feet thick. The ice moves around and gets thicker and thinner and affects habitat for marine life, affects climate in the northern regions; af77